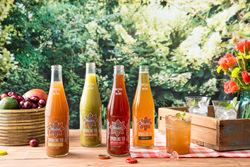 This new line of Sparkling Teas was inspired from my journeys to India and incorporate the fresh, organic ingredients that our fans demand with the same fresh ginger spice that they expect from our products.

“Bhakti is a mission-driven and ethnic-inspired brand devoted to creating products with exciting flavors that evoke travel memories or inspire adventures yet to be experienced. This new line of Sparkling Teas was inspired from my journeys to India and incorporate the fresh, organic ingredients that our fans demand with the same fresh ginger spice that they expect from our products,” said Brook Eddy, Founder and CEO at Bhakti.

The four new Bhakti Sparkling Teas will debut at the 2016 Natural Products Expo West trade show in Anaheim over the weekend of March 11th-13th. The new teas come in a 12 oz. glass bottle and are each under 60 calories. They are Non-GMO Project Verified, feature organic, fresh ingredients and are made with Fair-Trade certified teas. Similar to the rest of the brand’s products, the Sparkling Teas are also gluten-free and vegan.

“Research and sales data over the last twenty years shows that consumers want carbonation, but they want it in a healthier product than a traditional soda. There is also this growing trend of consumers opting for more exotic beverages and flavor combinations, which helped inspire our new line of Sparkling Teas, which we couldn’t be more excited to introduce to Bhakti fans,” said Denise Day, Marketing Director at Bhakti.

Bhakti Sparkling Teas (SRP: $2.99) will be available starting in April at Whole Foods Markets nationwide and in June at additional natural and conventional grocery stores across the country.

Bhakti has historically launched new products at Expo West with great success due in part to their sponsorship of the Friday Morning Yoga Concert. “The Bhakti yoga event on Friday morning (is) the best start to an Expo that I’ve ever seen or experienced. It’s such a positive-energy, love-filled, truly community-building event and I know I speak for a lot of people when I say that it set the tone for the rest of the weekend,” raves Delicious Living former Editor In Chief Elisa Bosley.

Participants in the 2016 Friday Morning Yoga Concert will be the first to taste Bhakti’s Sparkling Tea as full bottles will be handed out upon arrival for people to enjoy during the yoga class led by Janet Stone and live music performed by Kevin Paris and indie rock band, Magic Giant. Samples of Bhakti’s new Sparking Tea will also be available at Bhakti’s booth (#5517) throughout the convention.

About Bhakti:
An interest in social action and a passion for travel led Bhakti Founder and CEO Brook Eddy to India in 2002 to research a movement based on the principles of Bhakti, or “devotion through social action.” In 2007, Bhakti Chai was born with the vision of fusing sustainably sourced ingredients, artisan craft-brewed products and the values of triple bottom line business. This vision and leadership continue to permeate the company’s spicy brew by championing causes through their new Gita Giving platform and blending beverages into a crusade for a better world. Bhakti Chai concentrates, ready-to-drinks and Artisan teas are available at Whole Foods Markets, natural and independent markets, Costco, Kroger, Target and cafés around the country. The Sparkling Tea line will be available exclusively at Whole Foods Markets through May and then at most natural and conventional retailers nationwide starting in June 2016.