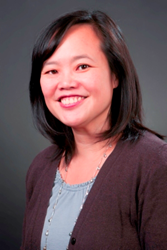 "Among Chinese Americans, rates of lung cancer have been either increasing or stable, depending on which histology you look at. And this is interesting because this is in contrast to patterns we see in other U.S. populations,” said Dr. Gomez.

In the first study of Chinese Americans with lung cancer, led by the Cancer Prevention Institute of California and published in the February issue of the Journal of Global Oncology, researchers found some key differences between men and women. A summary of the research findings is now available on the ASCO homepage and the ASCO Connection website.

According to the study’s lead researcher, Scarlett Lin Gomez, Ph.D., M.P.H., an epidemiologist at the Cancer Prevention Institute of California and the Stanford University School of Medicine, “Is this effect seen because women who are married have greater social support, mental support, or financial support? Is the driving factor here that some neighborhoods have greater access to certain economic and medical resources? The benefit of this kind of epidemiology is that we can uncover patterns that help us pinpoint areas where we might focus, whether for research or interventions. Once we are able to determine what the factors are that are driving these patterns, we can design targeted interventions that may improve the length and quality of survival, for Chinese Americans and other populations.”

Previous studies have also indicated that the better survival among women, regardless of race/ethnicity, may be related to differences in tumor molecular or biologic profile, drug metabolism, and/or DNA damage susceptibility and repair capacity.

Dr. Gomez chose to focus her research on Chinese Americans diagnosed with lung cancer because of the population’s unique characteristics.

In this study, researchers looked to the population-based California Cancer Registry to find data on 1,616 women and 2,216 men who were diagnosed with lung cancer between 2000 and 2010.

About the Cancer Prevention Institute of California
The Cancer Prevention Institute of California is the nation’s premier organization dedicated to preventing cancer and to reducing its burden where it cannot yet be prevented. CPIC tracks patterns of cancer throughout the entire population and identifies those at risk for developing cancer. Its research scientists are leaders in investigating the causes of cancer in large populations to advance the development of prevention-focused interventions. CPIC’s innovative cancer prevention research and education programs, together with the work of the Stanford Cancer Institute, can make our vision of a world without cancer a reality. For more information, visit CPIC’s official website at http://www.cpic.org.