Artistic representations of the killing fields of Khojaly exhibited in Parliament

The inaugural Khojaly Peace Prize – aimed at UK-based art students inspired by the Khojaly Massacre – has been awarded during a ceremony organised by The European Azerbaijan Society (TEAS) under the auspices of the 'Justice for Khojaly' campaign. It was held in the Strangers' Dining Room of the UK Parliament. 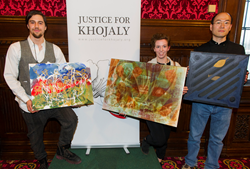 Today’s exhibition is taking place very close to the commemoration of the Khojaly Massacre that took place back in 1992. This was ignored by the world and sadly none of the perpetrators have been brought to justice.

On 24 February, the horrific slaughter of the Khojaly Massacre was remembered in the UK Parliament through the medium of art with the presentation of the inaugural Khojaly Peace Prize. The evening showcased a range of artworks submitted by UK-based students and young artists, inspired by the challenge of harnessing the power of the image to promote peaceful resolution of the ongoing Armenian–Azerbaijani conflict over Nagorno-Karabakh and other wars, together with stimulating international empathy with the plight of refugees and internally displaced persons (IDPs). The competition and exhibition, organised within the Justice for Khojaly campaign, commemorated the victims of the Khojaly Massacre on 26 February 1992.

This was the worst single atrocity of the Armenia–Azerbaijan conflict over Nagorno-Karabakh and claimed the lives of 613 civilian victims in 1992. The death toll included 106 women, 63 children and 70 elderly people.

Taking place in the Strangers’ Dining Room in the UK Parliament, the event was attended by around 150 people, including Lady Fiona Hodgson; Sir David Amess MP; Bob Blackman MP, Chair, Azerbaijan All-Party Parliamentary Group (APPG); Mark Menzies MP, Vice-Chair of the APPG; members of the Azerbaijani and Turkish diaspora; friends of Azerbaijan and art aficionados. The judging panel included Sabina Rakcheyeva, violinist and Arts and Cultural Advisor, The European Azerbaijan Society (TEAS), who was the first Azerbaijani graduate from the Juilliard School in New York and Bob Blackman MP.

Bob Blackman MP said: “Today’s exhibition is taking place very close to the commemoration of the Khojaly Massacre that took place back in 1992. This was ignored by the world and sadly none of the perpetrators have been brought to justice. As we approach the anniversary, I am tabling an Early Day Motion (EDM) in Parliament recognising the anniversary. It requests the implementation of the four UN Security Council Resolutions against Armenia and that justice is sought.”

Also sitting on the judging panel was Lionel Zetter, Director, TEAS, who commented: “Bob Blackman has now visited Azerbaijan three times and has met many of the survivors of the Khojaly Massacre. We were hugely impressed by the volume and quality of the entries for the art peace prize. Khojaly remains an event that is little-known worldwide. It took place during the dissolution of the Soviet Union, when there were many conflicts and border disputes, and Nagorno-Karabakh did not command the attention of the world’s media. This competition was thrown open to anyone who was living or studying in the UK and was inspired by the tragic events of that night. Its purpose was to sympathise with those who survived but suffered terribly, and also with those who lost loved ones. Also, of course, to try and ensure that such horrific events are not repeated.”

Mark Menzies MP remarked: “As someone who is a friend of Azerbaijan and a visitor to the country, I understand some of the problems and issues that it has to face, including the Khojaly Massacre. Today’s event focuses on some of these issues via the medium of art. I am delighted that so many art students from across the UK have participated.”

The third prize was awarded to South Korean art student Seungjo Jeong for his artwork Interface, where a drain cover represents the geopolitical, economic and diplomatic barriers inhibiting the movement of IDPs and refugees, and yellow leaf represents fragile human nature and the lives of those on the ‘contact line’.

Second place was awarded to Eileen Anderson for her piece Birds of Paradise. She was inspired by artworks created by IDPs and refugees around the world, laying them together and printing them on acetate. One of these was an artwork by a child who had drawn many brightly coloured birds, from which she appropriated her own title.

First place was given to Gordon Berger, which features a traditional Paisley-Buta design, Azerbaijani flats, flags and dances. It is a reminder of the importance and growing together, and seeks to remind viewers of the importance of recognising our commonality and shared humanity.

Despite the passing of four UN Security Council resolutions against the invasion, Armenia continues to occupy Nagorno-Karabakh and seven surrounding districts to this day. Currently nearly 20 per cent of Azerbaijani territory remains occupied, and approximately one million refugees and IDPs are spread across Azerbaijan. The evening was dedicated to the memory of the Khojaly victims and those Azerbaijanis who have only one wish – to return home.