Robert A. Clifford of Clifford Law Offices to Participate in The National Hellenic Museum’s Trial Series

Robert A. Clifford of Clifford Law Offices will participate in The Trial of Antigone, alongside other leading legal scholars Thursday, March 10, 2016, at the Field Museum in Chicago 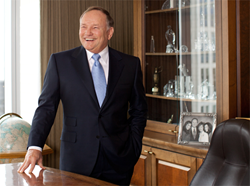 The National Hellenic Museum’s Trial Series are educational and memorable, and I look forward to being a part of it again.

Founder and Senior Partner of Clifford Law Offices, Robert A. Clifford, and other famed legal scholars will take on the Case of Antigone v. Creon at the Field Museum’s James Simpson Theatre in Chicago on March 10, 2016.

The event is part of The National Hellenic Museum’s Trial Series which “highlights the enduring relevance and value of Greek philosophy and thought. It is a unique opportunity to watch some of America’s foremost legal minds and theorists contemplate and debate evolving issues and perennial questions that have concerned humanity for thousands of years.”

The Trial of Antigone will be held on Thursday, March 10, 2016, at the Field Museum in Chicago. Doors will open at 6 p.m. and the trial begins at 6:30 p.m. Regular tickets cost $100, Hellenic Bar Association member tickets cost $85, and student tickets cost $50.

To learn more about Robert A. Clifford, click here. To purchase tickets to the Trial of Antigone, click here.

About Robert Clifford
Robert A. Clifford is the founder of Clifford Law Offices, a nationally recognized personal injury law firm in Chicago concentrating in aviation, transportation, personal injury, medical negligence, and product liability law. He was named by Chicago Magazine as one of the top 100 Most Powerful Chicagoans in 2013, and remains committed to raising the quality of the practice of law in the state of Illinois and promoting civility. Clifford was named the 2012 Chicago Lawyer Person of the Year. Based upon his trial accomplishments, and his contributions to the legal community and the Chicago area, his colleagues nominated him for the prestigious honor given to one person each year. He’s also been named to the Top 10 Illinois Super Lawyers list since 2005. To learn more about Robert A. Clifford visit: http://bit.ly/20hxeJn.

The Trial of AntigoneThe event will be on Thursday, March 10, 2016 at The Field Museum in Chicago.