Strong Demand Leads to Expanded Schedule for Queen of the West 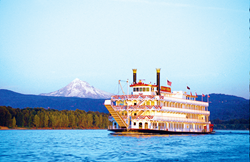 “Guests and travel agents alike have shown a positive response to our new value offering on the Columbia and Snake Rivers,” said Susan Shultz, Director of Sales. “We’re thrilled to continue this expansion."

American Cruise Lines announced today the expansion of its Columbia and Snake Rivers offering. The line is introducing a 5-day Highlights of the Columbia River itinerary as well as adding four additional dates to its 8-day Columbia and Snake Rivers itinerary aboard Queen of the West. American Cruise Lines made this decision in response to the overwhelming interest it received since the announcement of lower pricing aboard Queen of the West.

“Guests and travel agents alike have shown a positive response to our new value offering on the Columbia and Snake Rivers,” said Susan Shultz, Director of Sales. “We’re thrilled to continue this expansion by offering even more ways to experience the American Cruise Lines’ brand and the amazing places we visit.”

The new Highlights of the Columbia River cruise will offer, for the first time, the convenience of a round-trip Columbia and Snake Rivers cruise from Portland, OR. The cruise will feature the national scenic areas of Columbia River Gorge, the famous Multnomah Falls, Mount St. Helens, and Fort Clatsop, where Lewis & Clark spent the winter of 1805-1806 during their historic journey. Four dates in 2016 have already been released for this itinerary, while three more are scheduled for 2017.

Guests looking to experience these carefully curated itineraries at value pricing will be able to do so aboard the line’s pioneer riverboat, Queen of the West. The line will also be reducing the ship’s capacity to 100 passengers, to allow for an even higher level of comfort for its guests. This increase in space as well as crew-to-guest ratio is the most recent in the series of updates made by the line to offer the broadest range of products for all guests while remaining the best value on America’s greatest rivers.

For more information regarding the Highlights of the Columbia River cruise and additional dates scheduled for the Columbia and Snake River cruise, visit http://americancruiselines.com/cruises/alaska-and-pacific-northwest.

About American Cruise Lines
American Cruise Lines (http://www.americancruiselines.com) is the largest U.S. cruise company and operator of the newest fleet of riverboats and small cruise ships in the United States. It offers more than 35 itineraries (http://www.americancruiselines.com/cruises) ranging from four to 21 nights in length around the country including the Pacific Northwest, Alaska, New England, the Southeast and the entire Mississippi River system. The line has been continuously recognized for providing superb service to guests and travel agents before, during, and after a cruise to create a seamless and personalized experience.