Product Launches in Global Marketplace with an Exclusive Biodegradable Formula 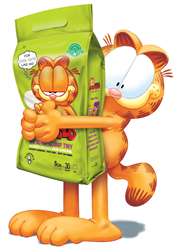 “Garfield is a very particular cat. He loves his creature comforts and is meticulous about cleanliness. This product lives up to his high expectations,” said Garfield’s creator, Jim Davis.

Garfield’s licensing company, Paws, Inc., and 7Pets, a Miami based company specializing in pet products, announced the launch of a new Garfield branded cat litter today. Garfield Cat Litter meets the challenge regarding safety, cleanliness, practicality, and odor control and is 100% natural and biodegradable. The exclusivity of the formula inspired Paws, Inc. to license Garfield to promote the brand in the US and Canada.
Buyers and visitors attending the Global Pet Expo 2016 in Orlando (March 16th – 18th, booth #5285), will have the opportunity to see how Garfield Cat Litter differentiates itself from other litters using an exclusive formula combining only natural ingredients from South America.

The blend of these natural ingredients enables instant clumping and eliminates the strong ammonia odor that is distinctive of cat’s urine. Additionally, Garfield Cat Litter is flushable in the toilet, without jeopardizing the environment. It forms instant solid clumps and is very absorbent, making it easier for pet owners to maintain litter boxes.

“We were impressed by the effectiveness of this formula, especially regarding its natural odor control”, says Allex Bonadiu, founder at 7Pets. “Indeed, the product should be branded under the most celebrated cat in the planet”, he adds.

“Garfield is a very particular cat. He loves his creature comforts and is meticulous about cleanliness. This product lives up to his high expectations,” said Garfield’s creator, Jim Davis.

Garfield Cat Litter is gentle to paws and dust-free. Considering there are no chemicals added, the litter is unscented. Lastly, its white color allows for the tracking of potential health problems which would be indicated by the presence of blood in the cat’s urine, for example.

The new cat litter is currently available at Amazon.com and at http://www.garfieldcatlitter.com and will be promoted at the most important trade shows and pet expos in the world.

After realizing that the pet industry, for years, had had an important problem to solve regarding eliminating the ammonia odor of cat's urine without using chemicals or fragrances, specialists at 7Pets discovered a natural formula that completely eliminates the ammonia smell. Further tests showed that, besides neutralizing the odor, the formula also offered extremely high absorbency and instant clumping.

Cartoonist Jim Davis’ company, Paws, Inc., located near Albany, Indiana, was founded in 1981 to handle the creative end of the Garfield licensing business. Today, Paws is the sole owner of all copyrights and trademarks for the Garfield property, and controls not only the creative angle of the fat cat’s flourishing empire, but also the licensing, marketing, and brand management of Garfield and the Garfield characters.