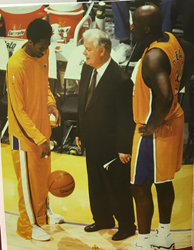 A lifetime athlete turned basketball coach for Kansas State University, the Chicago Bulls, and the LA Lakers, Fred “Tex” Winter revolutionized the game with his offensive strategy of teamwork. Coach Tex Winter: Triangle Basketball, a USA Best Book Awards winner, is a story that highlights Winter’s original “Triple Post Offense,” that led him to develop a believer in Phil Jackson. That strong professional relationship would put Winter in the seat beside Jackson for many seasons with the Bulls, Lakers and the players who are now legends of the game and household names.

“Tex Winter is the innovator of the sideline triangle offense,” says Former NBA Coach Phil Jackson. “We’ve watched a lot of game tape together. We’ve argued. We’ve cajoled each other, and he’s been a real mentor and compatriot to me.”

“March Madness and the NBA playoff season offers the perfect opportunity to remember one of basketball’s greatest coaches who made such an important contribution to the game,” says author Ann Parr. “This book highlights Tex’s background, values, and character, including how he found his love for sports, followed it, and thrived. “It’s a result of a team effort–a concept Tex advocates and has lived all his life.”

Over the years, Tex was not only a master champion in gaining support for the triangle offense, but used it to unify his players. Tex’s revolutionary strategy of playing into the opponent’s energy, instead of running preplanned plays, made him a coaching legend in the world of basketball. Using his famous triangle basketball approach, Tex influenced household names, like Kobe Bryant, Michael Jackson, and Shaquille O’Neal.

Famed LA Lakers player, Kobe Bryant, who is slated to retire after this season says, “The reason I love Tex so much is that he’s just so open and all he sees is basketball,” says LA Laker Kobe Bryant. “I mean that’s all he cares about. The first thing he said when I got here was, ‘I don’t criticize the individual. I criticize the act.’ He’s constantly on everybody about the game, but that’s what he cares about, and that’s what I love about him.”