The State of Indiana recently became the second state in the country to establish an accelerated application process for Foreign-Trade Zones (FTZ) in all counties, behind Delaware, which has three counties. 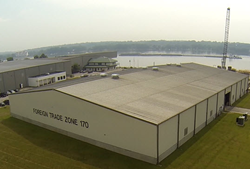 The State of Indiana recently became the second state in the country to establish an accelerated application process for Foreign-Trade Zones (FTZ) in all counties, behind Delaware, which has three counties.

On Feb. 22, the U.S. Foreign Trade Zone Board approved the Alternative Site Framework (ASF) designation for Randolph County, making it the 92nd and final county in the state to be approved for a streamlined FTZ application process.

There are 41 states that have been approved for the ASF designation in at least one county, and only three states have more than 80 percent of their counties approved.

The ASF designation was created by the U.S. Foreign-Trade Zones Board to reduce the time and paperwork required to establish an FTZ, in some cases reducing the application process from one year down to 30 days. FTZs are designed to reduce, eliminate or delay duties on certain international goods in order to increase competiveness of American companies and protect U.S. jobs.

“Having every county approved for the streamlined FTZ application process is a unique asset for Indiana,” said Rich Cooper, CEO for the Ports of Indiana. “Indiana’s FTZ administrators were committed to pursuing the ASF designations in order to provide a faster pathway for businesses to obtain FTZs and to eliminate some of the obstacles companies face when exploring FTZ benefits. In an expanding global economy with increased competition among nations for jobs, industry and capital, FTZs help promote American competitiveness by encouraging companies to maintain and expand their operations in the United States.”

“The community of Randolph County is pleased with this important approval for membership in the Foreign-Trade Zone 182 district,” said Bruce W. Hosier, executive director of the Randolph Economic Development Corporation. “Given the circumstances of the global business presence in our communities, this asset will put in place another important piece of the puzzle, helping build our economic development capacity and securing a better path forward for those we have the privilege of serving.”

Many states are not able to receive ASF designation because of geographical challenges and the vast distances between international ports of entry. Indiana’s central location allows it to connect with multiple ports of entry in and around the state. The City of Fort Wayne made a special application to service Randolph County because its territory is at the limit of the ASF boundary.

“We’re looking forward to our region working with Randolph County and offering the advantages of being located within the Foreign-Trade Zone,” said Fort Wayne Mayor Tom Henry. “This innovative approach will help boost economic development efforts and allow more businesses to maximize opportunities to promote growth for international business.”

Designated by the U.S. Department of Commerce Foreign-Trade Zones Board, a Foreign-Trade Zone allows foreign and domestic merchandise to be admitted to the U.S. for operations such as storage, exhibition, assembly, manufacture and processing, without being subject to formal customs entry procedures, the payment of customs duties or the payment of federal excise taxes until the finished goods leave the zone and enter the U.S. for domestic consumption.