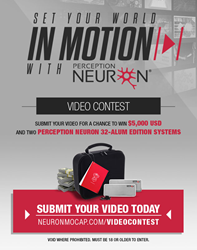 There is so much versatility with this product, so much that is possible to do, that we wanted to test the boundaries by asking people to give us their most imaginative concepts for motion capture.

Perception Neuron, the versatile motion capture system that delivers professional results right of the box and is now poised to play an instrumental role in the VR arena, is launching a video contest that asks participants to get as creative as they can with “the power of motion capture.”

Open to contestants anywhere in the world, the “Set Your World in Motion with Perception Neuron” video contest aims to broaden the horizons for creativity in mocap. The contest asks users to submit a concept of how they will use the motion capture technology in an innovative, inventive and pioneering way that has not been thought up yet. The contest is not just open to gaming and animation—Perception Neuron encourages ideas in projects relating to art, science, health, education and entertainment.

“There is so much versatility with this product, so much that is possible to do, that we wanted to test the boundaries by asking people to give us their most imaginative concepts for motion capture,” says Haoyang Liu, CTO of Noitom. “We have already been amazed by some of the projects our users have created at home. Now we want to help fund the next big idea in motion capture.”

The Perception Neuron motion capture system does not require the use of cameras and is currently the most affordable product of its kind available. Users from around the world—including film studios and VR professionals—have praised the system’s adaptability, user-friendly functionality, and lightweight wearability. Since launching in 2014, Perception Neuron has opened the doors to motion capture to users everywhere for whom that type of technology had been completely out of reach until now.

To enter the “Set Your World in Motion” Perception Neuron video contest, participants must submit a 2-5 minute video presentation of their project which must explain how the motion capture will be utilized. There are no official rules to how participants can theme their video. Entries can be made using live-action, animation, imagery or by simply filming a verbal explanation of the concept. So long as that concept is clear, the video will be approved for submission. The official rules for the contest can be found on the contest website.

Submissions and voting are open through June 1, 2016 and the winners will be announced in early July.

Perception neuron will be at the Game Developer’s Conference in San Francisco from March 14-16 at the Moscone Center, Booth #602. For more information about GDC 2016, please visit gdconf.com.