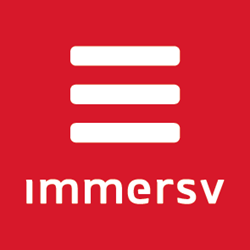 Our goal is to build a marketplace to help consumers discover great VR apps and experiences, and to empower all the artists, content producers and game publishers building VR content to turn their hard work and creativity into commercial success.

Today, Immersv (http://www.immersv.co) announced the public launch of its mobile Virtual Reality advertising platform. The first-of-a-kind platform, which has been in private beta since December 2015, was built from the ground up to help consumers discover great VR apps and entertainment while enabling VR developers to drive both distribution and monetization for their content. Immersv’s innovative platform will be on display at next week’s Game Developers Conference.

“Virtual Reality has reached its tipping point, and just about the only thing holding it back is consumers’ ability to find great VR content,” said Mihir Shah, co-founder and CEO of Immersv. “Our goal is to build a marketplace to help consumers discover great VR apps and experiences, and to empower all the artists, content producers and game publishers building VR content to turn their hard work and creativity into commercial success.”

Immersv provides stunning, immersive virtual reality advertising experiences for mobile VR platforms such as Samsung Gear VR Powered by Oculus, Google Cardboard and other VR headsets. The ad units, featuring trailer videos for apps, can be seamlessly integrated into any VR app wherever a developer deems appropriate, such as when the consumer first launches VR content, during natural breaks in the action, or as part of the native app experience. App marketers can choose to run flat videos within customizable VR settings or spherical videos that completely envelop the viewer. Immersv’s open bidded advertising system gives app developers complete control over their media spend, while the lightweight Immersv SDK is easy to integrate and comes with reliable install tracking and campaign analytics.

In beta testing, the network-wide completion rate for Immersv videos was 79%, with some app trailers experiencing completion rates as high as 88%. By comparison, a report from ad-serving platform Vindico found that video ad completion rates averaged just 46% on smartphones and 54% on tablets. The exceptional completion rates of Immersv’s virtual reality ad units shows that consumers find the VR ads extremely engaging and entertaining.

"Immersv enables users to discover new VR apps in a cinematic 3D experience,” said Eric Hine, Executive Producer, Archiact Interactive Ltd. “The most unique part about the VR ad experience is how genuinely enjoyable it is. Our users are loving that ads have become a fun natural extension of Archiact's games.”

“Immersv fills an important void in the virtual reality industry: they provide discovery for VR in VR,” said Marcin Szymanski, Founder, Element Games. “And our users love the ad experience -- the Immersv solution is a natural extension to our game.”

"We looked at other solutions to help launch our newest platform, EON Creator AVR, but the Immersv platform is definitely the most mature and sophisticated technology in the market," said Josephine Munis, Director of Online Marketing & Strategic Partnerships at EON Reality. "What better way to watch the trailer videos for VR apps than in a VR setting?"

According to SuperData Research, the worldwide market for virtual reality gaming is growing aggressively and will reach $5.1 billion in revenue in 2016, with an install base of 38.9 million consumers. Total investments in virtual and augmented reality reached a combined $6.1 billion between 2012 and 2015, triggering the current market momentum.

About Immersv
Immersv is a mobile Virtual Reality advertising platform dedicated to driving the mobile VR market to mass consumer adoption. Founded in 2015 by an experienced team of experts in app marketing and ad-tech, Immersv is built from the ground up to help consumers discover great VR apps and entertainment while enabling VR developers to drive both distribution and monetization for their content. The company has offices in Emeryville, and Los Angeles, California, and is backed by top-tier investors including Foundation Capital, Technicolor Ventures, Rothenberg Ventures, TenOneTen Ventures, CAA Ventures, All Mobile Ventures, 137Ventures, Gigi Levy, and more. For more information, visit http://www.immersv.co.