Over 80% of Smartphone Users Now Stream Video on Their Devices, According to The NPD Group 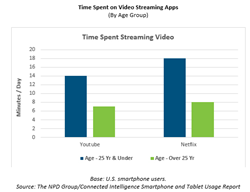 “Users are spending more time watching videos on their smartphones than ever before, as the adoption of smartphones that boast larger displays increases," noted NPD Connected Intelligence Mobility practice research director Brad Akyuz.

Eighty-one percent of all U.S. smartphone users now stream video on their devices, according to recently released data from The NPD Group’s Connected Intelligence Smartphone and Tablet Usage Report. This usage is being driven primarily by users who are 25 and younger, who spend twice as much time watching video content on YouTube and Netflix mobile apps compared to users who are over the age of 25.

As a result of this uptick in video consumption, users who are 25 and younger outperform older age groups in terms of cellular and Wi-Fi data consumption levels generated by video applications. These users consume, on average, 6.2 GB of data (cellular and Wi-Fi combined) for video streaming purposes each month, versus older smartphone users who use an average of 4.9 GB of data for video streaming monthly.

NPD Connected Intelligence Mobility practice research director Brad Akyuz noted, “Users are spending more time watching videos on their smartphones than ever before, as the adoption of smartphones that boast larger displays increases. This mobile streaming behavior is further bolstered by the new offerings of wireless operators, such as T-Mobile’s Binge On and Verizon Wireless’ go90, which run on free sponsored data.”

*The NPD Group’s Connected Intelligence SmartMeter is an opt-in on metering solution that resides on consumers’ smartphones and tablets.

Methodology:
NPD Connected Intelligence’s Smartphone and Tablet Usage Report leverages a panel of opt-in consumers that are recruited via a Web-based solution and who then install a metering app on their smartphone and/or tablet. The panel is metered via a network-based service, as well as via an on-device app, providing a broad range of tracking capabilities of device activities. The panel consists of several thousand Android and iOS device users regularly tracked on a monthly basis, and is balanced and appropriately weighted to be representative of the US smartphone and tablet population.