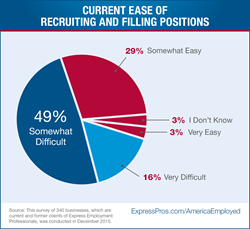 With the unemployment rate declining and more people headed back to work, it’s not so surprising that companies are finding it a little harder to fill open positions,

The findings come from a survey of 340 businesses. Respondents were asked, “Currently, how easy is it for you to recruit and fill positions?”

More respondents said “very difficult” or “somewhat difficult” (65 percent) in this survey than in any of the four hiring trends surveys conducted by Express in 2015. The increase in reported difficulty corresponds with the decrease in the unemployment rate.

“With the unemployment rate declining and more people headed back to work, it’s not so surprising that companies are finding it a little harder to fill open positions,” said Bob Funk, CEO of Express and a former chairman of the Federal Reserve Bank of Kansas City.

“Of course, we still have plenty of people who want jobs—and others who have given up looking altogether. Part of the difficulty has been that the people who want to work may not have the skills that employers need.”

The survey of 340 businesses, which are current and former clients of Express Employment Professionals, covers hiring trends for the first quarter of 2016.

About Robert A. Funk
Robert A. “Bob” Funk is chairman and chief executive officer of Express Employment Professionals. Headquartered in Oklahoma City, the international staffing company has more than 760 franchises in the U.S., Canada and South Africa. Under his leadership, Express has put more than 6 million people to work worldwide. Funk served as the Chairman of the Federal Reserve Bank of Kansas City and was also the Chairman of the Conference of Chairmen of the Federal Reserve.