As basketball fans across the nation fill out brackets and eagerly await the start of the annual NCAA Basketball Tournament, Connor Sports® is preparing for March Madness® by manufacturing and installing the official courts for the NCAA Men’s and Women’s Basketball Tournaments, which culminate with the Final Four®. 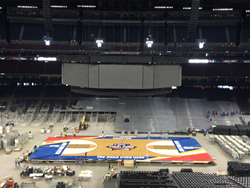 As basketball fans across the nation fill out brackets and eagerly await the start of the annual NCAA Basketball Tournament, Connor Sports® is preparing for March Madness® by manufacturing and installing the official courts for the NCAA Men’s and Women’s Basketball Tournaments, which culminate with the Final Four®.

As the Official Court Builder of the NCAA Final Four, Connor Sports will provide and install NCAA courts for the 1st and 2nd Round games and Regionals for the 2016 Men’s and Women’s Basketball Tournament. Connor Sports will also provide a custom-created court for the Men’s Final Four to be played April 2-4 at NRG Stadium in Houston, and the Women's Final Four® on April 3-5 at Banker’s Life Fieldhouse in Indianapolis. This year marks the 11th year that Connor Sports has been the Official Court Builder for the NCAA Final Four®.

Connor Sports manufactures their QuickLock® portable floors annually for installation at both the men's and women's regionals and Final Four tournament venues each year. Additionally, the NCAA uses nine courts from Connor Sports that are maintained to the highest standards and installed by Connor for the first and second rounds of men’s tournament play annually.

"We look forward to participating in the Final Four tournament every year and take role in the success of the NCAA very seriously. As a Champion of Customer, we strive to provide the NCAA with the best logistical and technical support throughout the tournament, enabling the NCAA to focus on providing a memorable experience for fans, teams, volunteers and employees," said Ron Cerny, CEO, Connor Sport Court International. "We are very proud to again be the Official Court for the NCAA Men’s and Women’s Basketball Tournaments.”

The 2016 Final Four courts are made from Forest Stewardship Council (FSC)-certified first-grade Northern Hard Maple sourced from Michigan forests including the Nature Conservancy®-owned Big Two Hearted Nature Preserve and is 70’ X 140’ and totals 9,800 square feet using 397 4’ x 7’ panels weighing approximately 188 pounds each or 37 tons in total. The Women’s Final Four surface is also FSC-certified and measures 60’ x 120’ at 7,200 square feet with 262 4’ x 7’ panels at more than 24 tons in total.

Prior to the Final Four, the courts were manufactured and inspected at the Connor Sport mill in Amasa, MI in the fall of 2015. The floor panels were stacked and banded in January and then loaded onto a UPS® trailer and shipped to Connor’s valued finishing partners: Praters Athletic Flooring in Chattanooga, TN for the men’s court, and The Ohio Flooring Co. in Shreve, OH for the women’s court. The courts are then assembled, sanded, sealed and painted before being loaded and finally delivered by UPS in special, NCAA Final Four graphically-branded trailers to each Final Four location stadium. Each floor takes approximately five hours to install led by Connor Sports Technical Supervisors and a team of 10-12 local workers.

More athletic events are played on Connor Sport Court surfaces than on any other sports flooring in the world. Founded in 1872, Connor Sports floors have established themselves as the standard for professional and collegiate sports. Hardwood used in the courts is from a renewable resource, with the U.S. growing six times more hardwood than is harvested each year. Sport Court® is a registered trade mark of Connor Sport Court International. Since 1974, it has identified the original and authentic modular sport surface, continuously improved and patented to provide the highest levels of quality and performance. Connor Sport Court is proud to be the only sports surfacing company in the world that is independently audited and verified as "Zero Waste" and fully ISO 9001:2008 and ISO 14001 certified.