Astrogenesis, a solo-exhibition by Nikki Romanello exploring the topic of astrobiology, will open at the University City Science Center’s Esther Klein Gallery (EKG) on April 14, 2016 and run through May 27th. 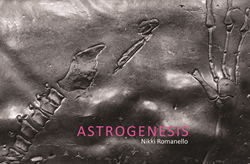 Astrogenesis, a solo-exhibition by Nikki Romanello exploring the topic of astrobiology, will open at the University City Science Center’s Esther Klein Gallery (EKG) on April 14, 2016 and run through May 27th. An opening reception will be held at EKG, located at 3600 Market Street in Philadelphia, on Thursday, April 14th from 5:00-7:30 pm. As part of the Philadelphia Science Festival, the artist will be hosting a special Bio Art Workshop on Sunday, April 24th from 10:00 am-1:00 pm at EKG.

Astrogenesis is the formation of a star-shaped neuron in the brain and a representation of the human imagination. Astrobiology is a combination of what biologists know about life and what could possibly exist beyond Earth. The exhibit, Astrogenesis focuses on the search for traces of life. Nikki Romanello creates hybrid skeletons and fossils based on animal remains that represent the evidence of life while imagining alternative species and histories. The sculptures are created with various materials such as glycerin soap, cast pewter, as well as live yeast and bacteria. Visitors to the gallery can also expect to see a series of deep space terrariums depicting scenes from future space missions.

Romanello’s Bio Art Workshop will focus on kombucha brewing and various ways that the fungus can be utilized, not just for nutritional purposes but also for art making. Romanello will demonstrate how she makes paper and sculptural forms out of home- brewed kombucha that are eco-friendly and biodegradable. The workshop is free to the public and attendees will be given a kombucha scoby to take home and brew their own.

Nikki Romanello was born in Dallas, Texas and spent time as a child collecting bones, shells, animal and plant remains that familiarized her with the function, texture and form of natural artifacts. During her first year of college, she worked in a natural science lab, where she gained experience with several scientific processes. She received her BFA in Interdisciplinary Sculpture with a concentration in Photography at Maryland Institute of College of Art in Baltimore. She graduated with an MFA in Studio Art, majoring in Sculpture from the Pratt Institute in Brooklyn, New York. Currently she resides in Brooklyn researching various science disciplines, working as a Tungsten Inert Gas (TIG) welder for Token, a design studio merging contemporary art and industrial design, and teaching at the Brooklyn Brainery.

About the Science Center
The University City Science Center is a dynamic hub for innovation, and entrepreneurship and technology development in the Greater Philadelphia region. It provides business incubation, programming, lab and office facilities, and support services for entrepreneurs, start-ups, and growing and established companies. Since it was founded in 1963, graduate organizations and current residents of the University City Science Center’s Port business incubators have created more than 15,000 jobs that remain in the Greater Philadelphia region today and contribute more than $9 billion to the regional economy annually. The Science Center is leveraging its history as the nation’s oldest and largest urban research park as it joins forces with Wexford Science + Technology, a BioMed Realty company, to expand its footprint and rebrand its physical campus as uCity Square — a true mixed-use community of ingenuity. For more information about the Science Center, go to ucscreview.org.

About the Esther Klein Gallery
The Esther Klein Gallery (EKG), which opened in 1976, uses the creative arts as a platform to explore relationships between art, science and technology. EKG seeks to positively impact the cultural life of both its immediate neighborhood of West Philadelphia and the broader Philadelphia community. EKG programming is designed to explore the range of art, science and technology exhibitions and includes gallery talks, panel discussions, and education programs. For more information, visit http://www.EstherKleinGallery.tumblr.com