Thousands of doctors still practice while being disciplined for sexual misconduct, substance abuse, and making careless, sometimes deadly, mistakes; CR survey finds that 82 percent of Americans are in favor of requiring doctors to tell their patients if they are on probation and why 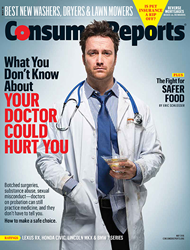 The onus shouldn't be on patients to investigate their physicians. Doctors on probation should be required to tell their patients about their status, and explain the reasons behind it.

Thousands of doctors are currently practicing medicine while being on probation for issues ranging from sexual misconduct and drug addiction to unprofessional and dangerous treatment of patients. But it’s difficult and time-consuming for consumers to find out if their doctor is one of them, according to Consumer Reports.

A survey by Consumer Reports finds that 82 percent of Americans are in favor of requiring doctors to tell their patients if they are on probation and why. And 66 percent lean toward barring doctors from seeing patients until their probationary period ends. But state medical boards and the American Medical Association have opposed efforts to create greater transparency around physicians’ disciplinary actions.

“The onus shouldn’t be on patients to investigate their physicians,” said Lisa McGiffert, director of Consumer Reports’ Safe Patient Project. “Doctors on probation should be required to tell their patients about their status, and explain the reasons behind it.”

The new report, which appears in the May issue of Consumer Reports and online at ConsumerReports.org, details cases like that of an obstetrician-gynecologist in Southern California. The doctor continues to practice medicine despite a report from the state medical board alleging that his errors of medical knowledge, judgment, protocol and attentiveness contributed to the death of two young mothers who had recently given birth to healthy babies.

Consumer Reports’ investigation found that people looking for a new doctor online would have a tough time figuring out whether their doctor was being disciplined.

“What You Don’t Know About Your Doctor Could Hurt You,” available at ConsumerReports.org, is part of Consumer Reports’ ongoing efforts to make it easier for patients to access information about their doctors. The organization is pushing for policy reforms that would make the system more transparent, including requiring doctors to tell patients when and why they are on probation, providing information from state medical board records in a clear and consistent way, and making information from the National Practitioner Data Bank (NPDB) open to the public. The NPDB collects data on physicians’ malpractice payouts and disciplinary records.

“You can find out more about the safety record of your toaster and whether or not it’s going to catch on fire than you can find about your physicians,” said patient-safety advocate Robert E. Oshel, the former associate director for research and disputes at the NPDB.

An analysis of NPDB data done for Consumer Reports by Oshel found that less than two percent of the nation’s doctors have been responsible for half of the total malpractice payouts since the government began collecting malpractice information. In total, some $85 billion has been paid out in malpractice cases during that period. While malpractice is considered an inexact indication of substandard care, Oshel says that multiple large settlements against a doctor “can be a warning sign ... suggesting that if licensing boards and hospital peer reviewers were willing to either get these doctors to stop practicing or get retraining, we’d all be better off.”

Currently, only hospitals, doctors, law enforcement, insurance companies, and a few other select groups have access to NPDB data. Consumers must rely on their state medical board, many of which have complicated websites and require time-consuming processes to get answers about specific doctors’ records. As part of its report, Consumer Reports investigated the state medical board websites in all 50 states and rated them from best to worst. California, New York and Massachusetts websites ranked the highest, with Hawaii’s, Indiana’s and Mississippi’s faring the worst. For complete rankings of all the medical boards, go to ConsumersUnion.org/safepatientproject.

“The system of disciplining physicians needs to be more transparent, reliable and accessible for patients,” said McGiffert. “Consumers need quick and easy access to this information to make educated choices about the physicians they see and the health of themselves and their families.”

What Government, State Boards Should Do

Consumer Reports’ Safe Patient Project is working with consumers across the country to make it easier for patients to learn about their doctors’ disciplinary history. Those efforts are focusing on five areas:

What Makes a Great Doctor

What does a good medical practice look like? The Peterson Center on Healthcare and researchers at Stanford University’s Clinical Excellence Research Center worked together to answer that question. First, they collected data from 15,000 U.S. primary care practices. To winnow the list down to the most successful ones, they used 41 accepted quality-of-care measures along with data on healthcare spending. They then sent a team of investigators to a sample of the highest-performing practices to figure out what set them apart. The most successful ones shared these characteristics, which all consumers can look out for:

About Consumer Reports
Consumer Reports is the world’s largest and most trusted nonprofit, consumer organization working to improve the lives of consumers by driving marketplace change. Founded in 1936, Consumer Reports has achieved substantial gains for consumers on health reform, food and product safety, financial reform, and other issues. The organization has advanced important policies to cut hospital-acquired infections, prohibit predatory lending practices and combat dangerous toxins in food. Consumer Reports tests and rates thousands of products and services in its 50-plus labs, state-of-the-art auto test center and consumer research center. Consumers Union, a division of Consumer Reports, works for pro-consumer laws and regulations in Washington, D.C., the states, and in the marketplace. With more than eight million subscribers to its flagship magazine, website and other publications, Consumer Reports accepts no advertising, payment or other support from the companies whose products it evaluates.
__________
MARCH 2016
© 2016 Consumer Reports. The material above is intended for legitimate news entities only; it may not be used for advertising or promotional purposes. Consumer Reports® is an expert, independent nonprofit organization whose mission is to work for a fair, just, and safe marketplace for all consumers and to empower consumers to protect themselves. We accept no advertising and pay for all the products we test. We are not beholden to any commercial interest. Our income is derived from the sale of Consumer Reports®, ConsumerReports.org® and our other publications and information products, services, fees, and noncommercial contributions and grants. Our Ratings and reports are intended solely for the use of our readers. Neither the Ratings nor the reports may be used in advertising or for any other commercial purpose without our permission. Consumer Reports will take all steps open to it to prevent commercial use of its materials, its name, or the name of Consumer Reports®.