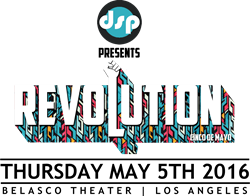 “Revolution means change, it is impactful and it pushes the envelope. This event will be no different.”

Cinco de Mayo will come alive with the announcement of REVOLUTION, a music and art experience that will take party-heads and eventgoers to a whole new level. Presented by Dov Serrot Productions, the full lineup was announced this week with multi-genre acts, including Alvin Risk, Lucent Dossier, Sam Sparro, Pls&Ty, Computer Club and Destenee along with 18 other performers. Doors will be open from 7pm until 3am. Tickets and packages, including VIP and All Access, are available now at http://www.dsptickets.com.

Featuring 3 stages, 24 music artists, political piñatas, visual art exhibits, poets, burlesque dancers and interactive media, Revolution brings a music festival atmosphere to the iconic Belasco Theatre in Downtown Los Angeles. Striking a balance between heart pumping live music and politically charged visual and performance art, the event organizers are bringing attendees together from all backgrounds to submerse themselves into the high energy surroundings of the event. DSP co-founder, Oran Smith, says the event is unique, and has heart. He states, “We wanted to create an event that embodies what we think Cinco de Mayo represents. It’s about making change, creating a revolution and standing up for something you believe in. Especially with what is happening with society and politics, there are so many people trying to divide the world, we want this to be something that brings people together.”

As event goers first arrive, they will be welcomed by street performers when entering the venue. They can then enjoy an open tequila bar (from 7pm until 9pm), while viewing politically themed performances and artwork from a source of artists and performers who are pushing the limits of their own genre, all the while experiencing live performances from some of the finest musicians and DJ’s in the industry today. Oran adds, “Revolution means change, it is impactful and it pushes the envelope. This event will be no different.”