Utility trend expert and global futurist Jack Uldrich is confirmed to deliver his key note, "Leadership for a Changing World: The Big AHA" to the Power South Energy Cooperative in Andalusia, AL on Thursday, April 28. 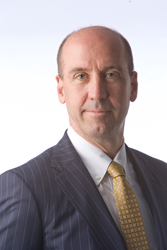 Sometime in the next century the utilities industry will be challenged in a way for which it has no precedent.

"From the outside, the utility industry may appear to many as slow, cumbersome and resistant to change," says global futurist and energy trend expert Jack Uldrich. "These characterizations may or may not be fair, but what is clear, " he says, "is that the industry is poised for an extraordinary change in the years ahead--what has served the industry well in the past won’t be sufficient for remaining competitive in the future. So it is imperative that the leadership in the industry embrace a new approach."

Uldrich's concept for leadership is based on "The Big AHA." AHA is his acronym for Awareness, Humility, and Action. Uldrich says these three tenets are critical for leaders. He goes on to state that "AHA", combined with a willingness to "unlearn", will provide fertile ground for leaders for future growth.

On April 28, Uldrich is slated to provide insight into energy trends and leadership for Power South Energy Cooperative. He will deliver his presentation: "Leadership for a Changing World: The Big AHA."

Uldrich, who has been hailed as the "Chief Unlearning Officer" by Businessweek says, "Continuous disruption is the new normal. And the most successful innovators/leaders in the utility industry will ask better questions, and as a result better answers."

Uldrich's School of Unlearning was founded in 2003. (More can be read about it in this recent Minnesota Business Magazine article.)

A distinguished thought leader and global futurist, Jack Uldrich is the author of 11 books and a regular guest and contributor for a number of national news outlets. He also frequently appears on the Science Channel’s FutureScape and Discovery Channel’s Inside Out.

Uldrich says, “Sometime in the next century the utility industry will be challenged in a way for which it has no precedent.” He hopes the information he shares with organizations will shed some light on how to prepare for and weather the storms they will face in the future.

Parties interested in learning more about Jack Uldrich, his books, his daily blog or his speaking availability are encouraged to visit his website.