U.S. Senator Richard A. Blumenthal, pioneering Lyme researcher Dr. Brian A. Fallon, Donald Trump's ex, actress Marla Maples, among those at Greenwich gala to fund research and ultimately a cure for Lyme and other tick-borne illnesses. 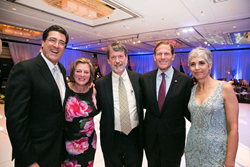 Thanks to GLA's funding there has been a major shift in our understanding of Lyme disease.

Global Lyme Alliance (GLA) announced today that its “Time for Lyme” fundraising Gala, held Saturday, April 2, at the Hyatt Regency Greenwich, raised over $900,000 to fund research and ultimately a cure for Lyme and other debilitating tick-borne illnesses.

“We are extremely grateful to all those who made our “Time for Lyme” Gala such a wonderful success—our sponsors, volunteers, donors, families and friends,” said GLA Chairman Robert Kobre. “This was a great evening for Greenwich with so many individuals passionately committed to this cause.”

Honored at the event was Dr. Brian A. Fallon, director of the Lyme and Tick-Borne Diseases Research Center at Columbia University Medical Center, who received the Lauren F. Brooks Hope Award, and Marla Maples, actress, Lyme survivor, and recent “Dancing With the Stars” contestant. TV personality Robert Verdi served as the evening’s master of ceremonies.

At the dinner, marked by warmth and camaraderie, Dr. Fallon, a Fairfield resident, said that thanks to GLA’s funding of the Columbia Research Center as well as Lyme researchers around the nation, “there has been a major shift in our understanding of Lyme disease. This shift is paradigm changing. Now chronic symptoms are accepted as worthy of study.  Now it is well recognized that persistent infection after treatment can happen.”

Maples, who had to leave early to return to Los Angeles for DWTS rehearsals, mingled with guests during a reception held earlier in the evening, and was joined by her pro-dance partner, Tony Dovolani.

“I am a lucky one,” she said about surviving Lyme. “Others suffer daily with chronic symptoms. I try to boost my immune system the best I can.” Maples said she hopes to help others better understand what those with the disease go through and the ongoing need to support research.

Gala Co-Chairs Robards and Swann each spoke about their personal experiences with Lyme. “Watching our naturally overly energetic JJ one day seem healthy and another day calling me into his room with tears saying he can’t move was devastating,” Robards said about her four-year old son, Jake Jr., who struggled with Lyme for two years before being diagnosed and successfully treated. “Nothing motivates us like our kids to be able to more conclusively decipher the illusiveness of Lyme.”

Following the speakers, a spirited auction was led by Jason Lamoreaux of Stokes Auction Group. Items offered included four VIP tickets to Wimbledon men’s singles semi-finals, two tickets to the 2016 Victoria’s Secret Fashion Show and after-party, luxury living for one week in a private Aspen, CO residence that sleeps 12, four tickets to the Dr. Oz show and much more.

In addition to the Gala, on Friday and Saturday, GLA hosted its annual closed-door Lyme Research Symposium for 20 eminent members of the scientific community who are either current or past GLA grant recipients or members of GLA’s Scientific Advisory Board.

Global Lyme Alliance will hold another major fundraiser in New York City on Thursday, October 13 at Cipriani’s 42nd Street. The event will be called “Uniting for a Lyme-Free World.”