During the 31st Music in Our Schools Month, Boston Area Arthur Murray Dance Centers raised $3,150 for the Give a Note Foundation. This philanthropic spirit is indicative of Arthur Murray's desire to keep music in the lives of students. 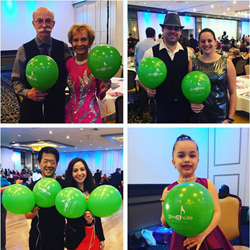 With one event Arthur Murray raised enough money to fund a school’s music program for at least year. That impact on students by providing for a high-quality music program will benefit them for a lifetime.

During the 31st annual Music in Our Schools Month®, the Boston area Arthur Murray Dance Centers put on a dance marathon to raise money for music education. Decked out in their favorite dancing attire, participants young and old came together and raised $3,150 for the Give a Note Foundation.

On March 6, the eight Greater Boston Area Arthur Murray Dance Studios gathered for their first Showcase event of 2016. The room was decorated with various music-themed items, including Give a Note green balloons, to set the mood. Morgan Laskey, Boston Area Events and Marketing Director for Arthur Murray, selected Give a Note Foundation as the charity to support.

“We like to be good citizens for our local community, and we were pleased to partner with Give a Note Foundation to help support our youth in their desire to keep music in their lives,” said Arthur Murray Boston Area Director Mark Lightner. “It seems that music and the arts are always being cut from budgets, and the ability of our amazing Arthur Murray students and studios to help in a small way gave us great pleasure. The fact that we contributed in a small way to help the cause was very fulfilling. Play ON!"

“We are so grateful to Arthur Murray Dance Centers—Boston for their incredible generosity,” said Give a Note board chair and president Beth Slusher. “With one event Arthur Murray raised enough money to fund a school’s music program for at least year. That impact on students by providing for a high-quality music program will benefit them for a lifetime.”

As America’s second oldest franchise organization, Arthur Murray International, Inc. is known around the world as a prominent entertainment company. With the beginning of a new millennium, social dancing is again a significant part of popular culture for all generations. Today, the Arthur Murray Franchised Dance Studios continue a tradition of more than 93 years in teaching the world to dance.

Give a Note Foundation was established in 2011 by the National Association for Music Education to increase support for music education programs for all children across the United States. The particular focus of Give a Note has been on providing direct grants to schools in low-income and underserved communities. The most recent NAEP (National Assessment of Educational Progress- 2009) report indicates that music education programs in public schools across America are strong in suburban and middle-class communities, but are actually on the decline in schools with higher poverty rates and larger minority populations. Through the grants and the corresponding awareness events, Give a Note seeks to give a boost to programs where the need is greatest and also where students could benefit the most.

Currently, Give a Note is conducting its third annual Music in Our Schools—Music Inspires Tour, providing $15,000 in grants to six schools chosen to host the 2016 Tour taking place March-April with Radio Disney.