Neighborhood Credit Union leaders surprised Donald Ivey and his wife, Pat, with a $10,000 prize as a reward for their good savings habits. 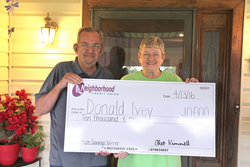 Donald and Pat Ivey of Sunnyvale were surprised with a $10,000 prize from Neighborhood Credit Union.

It's like a double hit: saving money and winning a prize for it.

Gray skies and steady rain did not dampen the joy at one Sunnyvale home Wednesday morning, as Neighborhood Credit Union leaders surprised Donald Ivey and his wife, Pat, with a $10,000 prize as a reward for their good savings habits.

“We are very surprised and very excited,” said Ivey. “We had hoped at some point, we might win something with our Prize Savings Account at Neighborhood Credit Union. It’s like a double hit: saving money and winning a prize for it.”

“When we received the call that we were going to win something, we couldn’t imagine,” said Mrs. Ivey. “People started warning us this was a scam because they didn’t think credit unions really give away prizes.” She admitted with a smile that after receiving the call, she contacted Neighborhood Credit Union to verify Senior Vice President Carolyn Jordan was a real person.

Ivey, who serves as pastor of Long Creek Baptist Church in Sunnyvale, is a religious saver who is “very frugal,” according to his wife.

“We use the credit union’s online tools to help us keep up with our finances,” explained Ivey. “We just picked a number and have that same amount of money transferred automatically into our Prize Savings Account every single month.”

The Iveys have been members of Neighborhood Credit Union since 1998. They learned about the credit union from his mother, who also is a member. Their sons also are members.

“The Iveys are great role models for how to be smart savers of money. They consistently pay themselves first,” said Jordan. “We hope others will be inspired during this National Financial Literacy Month to start setting aside money to invest in the future.”

“I tell the people in my congregation that it’s very important to put money aside for the future,” said Ivey. “There will come a day when you will need it.”

See the Video of the Surprise Delivery to Donald and Pat Ivey here.

How the Prize Savings Account works: Neighborhood Credit Union members receive one drawing entry for every $25 monthly average balance in their Prize Savings Accounts. The greater the savings, the greater the chance a member has of winning. Members are eligible for monthly drawings and quarterly $10,000 drawings. At the start of each year, a winner is drawn for the $25,000 grand prize based on the average monthly balance in the savings account at close of business December 31.