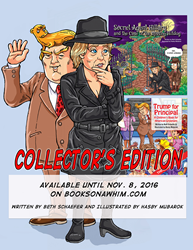 Interested in a feature story, a review or an interview with Beth Schaefer? Her new book offers a humorous and timely perspective on Donald Trump as well as a satirical detective story starring Hillary Clinton.

Contact O'Connor Communications for a review copy. Beth Schaefer will be happy to answer questions by phone or email. She is available in-studio in the Chicago area and by arrangement everywhere else.

The book includes two illustrated books in one: “Trump for Principal: A Children’s Book for American Grownups” and “Secret Agent Hillary and the Case of the Missing Hotdog.”

The first edition of Trump for Principal, launched in March, has been updated and expanded for the Collector’s Edition. Trump is parodied as a newly elected grade school principal.

He says the school is no longer respected because of the previous principal, an African-American woman. Soon the Mexican students no longer show up with no explanation. The computer lab is used to monitor Muslims. Trump’s name appears over the front door in huge gold letters four times the size of the name of the school. Chaos ensues when the nurse, the social worker, the janitor and other non-teachers are told, “You’re fired.”

The Hillary book is an example of absurdist fiction, a story that is humorous because it is deliberately irrational and ridiculous. Senior Sergeant Hillary is promoted to Secret Agent, the happiest day of her life.

Her first assignment is to find a treasured hotdog belonging of Hugh Heffner (misspelling intended), Curator of the Playboy Mansion. Hillary and her Secret Sidekick Macy track down recognizable public figures to locate the thief.

Every page has amusing characters and scenes that are lavishly illustrated in full color by cartoonist Hasby Mubarok.

The 2016 Election Collector’s Edition is limited and won’t be available after the November 8 election. The two parodies are also available as separate books.

All three books are available on http://www.BooksOnAWhim.com

Beth Schaefer has written and published four humorous books, a textbook on business writing, and a book about family. She is an adjunct communications professor and teaches composition at National Louis University in Chicago where she earned a master’s degree in written communication and psychology. She previously taught at Lake Forest College. She is owner of the publishing company, Books on a Whim. She and her son live in Evanston, IL.

Media Contact
Jim O’Connor, Publicist for Beth Schaefer
Review copies, color photography of the illustrations, and interviews with the author are available upon request.
Contact: Jim O’Connor, jimo(at)oconnorpr(dot)com or 847-615-5462