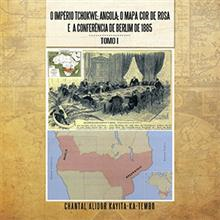 Chantal Alidor Kayitakatembo was shocked, disappointed and left indignant by what he saw as the falsification of the Tchokwe people’s history by Angolan authorities and historians. He says that he could not abide by the denial of the history of the Tchokwe people by the local government and the international community, and he could not stand to see it forgotten. This drove him to write “O Império Tchokwe; Angola; O Mapa Cor - De - Rosa E A Conferê Ncia De Berlim De 1885,” (published by Xlibris UK) to preserve the history of the Tchokwe and stem the tide of historical revisionism.

Kayitakatembo’s book makes a case for the independence of Eastern Angola, showing it to be different from Angola by providing evidence proving that the Tchokwe Empire was never part of the Angolan nation. It also shows the historic plight of the Tchokwe people, the invasion, exploitation, abuse and rejection they had to endure, and how their nation was destroyed by the titular 1885 Berlin Converence. Kayitakatembo makes shocking revelations, which include massive discrimination, the chaotic and uncontrolled exploitation of mineral resources and the total humiliation of the Tchokwe people, which he says began in the past and continues on to this day as a great injustice to an indiginous ethnic group, a grave consequence and a sordid legacy of the colonialism of bygone eras.

Kayitakatembo states that the information in this book contradicts the entire colonial history of Angola and that this is the first time his account has ever been published, bringing an in depth look at the true history that he alleges was hidden by the Portugese and Angolan government authorities. With “O IMPÉRIO TCHOKWE; ANGOLA; O MAPA COR - DE - ROSA E A CONFERÊ NCIA DE BERLIM DE 1885” he bolsters readers’ understanding on the intricate and delicate matters of Angolan affairs.

About the Author
Chantal Alidor Kayita-Ka-Tembo was born in the municipality of Tchitato in the province of Lunda-Norte. He has a degree in political science, is a historian and an expert of the Tchokwe Empire. Apart from being a teacher, he was also co-founder of the Social Renewal political Party. He also founded the Liberal Party of Angola, acting as a First Secretary General. He also promoted projects called Kurikunga and the memorandum in the Lunda-Norte province.

Xlibris Publishing UK, an Author Solutions, LLC imprint, is a self-publishing services provider dedicated to serving authors throughout the United Kingdom. By focusing on the needs of creative writers and artists and adopting the latest print-on-demand publishing technology and strategies, we provide expert publishing services with direct and personal access to quality publication in hardcover, trade paperback, custom leather-bound and full-color formats. To date, Xlibris has helped to publish more than 60,000 titles. For more information, visit xlibrispublishing.co.uk or call 0800 056 3182 to receive a free publishing guide. Follow us @XlibrisUK on Twitter for the latest news.
###