The International Conference on Clinical Sciences and Drug Discovery announces its world renowned top speakers from industry and academia for the second edition to be held in July in Dundee (the city of discovery), Scotland, United Kingdom with a focus on the translation of academic research findings into industry-driven drug development. 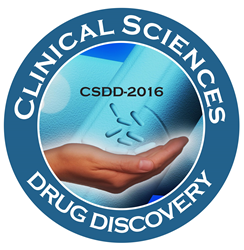 II International Conference on Clinical Sciences and Drug Discovery (CSDD-2016) organized by United Scientific Group, USA; will bring together the senior level experts with a perfect blend for multidisciplinary collaboration between clinicians, innovators, scientists, academicians from all over the world focusing on the recent trends on drug discovery and developments to clinical trials. The conference is supported by the European BioDiscovery Federation and will be held in Dundee, Scotland, UK on July 27-29, 2016.

CSDD-2016 features Sir Phillip Cohen, University of Dundee, Scotland as plenary speaker delivering on Kinase Inhibitors: Major Drugs for the 21st Century. He is the recipient of Royal Medal and has been described as "one of the world’s top scientists" and arguably the UK's leading biochemist and an iconic figure in UK science.

The edition presents high-level panel discussion on “Drug Discovery and Development in Academia by Thomas D.Y. Chung, Mayo Clinic, USA and a special session on “Host Cell Factors as Therapeutics and Drug Targets by Harold Smith, Rochester University, USA would be the highlights for the event.

The line-up of keynote speakers includes:

This edition is particularly important," said conference Chair Prof. Nikolai Zhelev, Director of CMCBR at Abertay University, Dundee, Scotland. He is also honorary professor in eight universities in UK, China and Bulgaria. Throughout the course of the three-day conference, the attendees will get an exclusive opportunity to network and be involved in inspiring and interesting discussions of scientists and researchers on antimicrobials: bacterial, fungal, viral, protozoal, antineoplastic, endocrinology and metabolism, hematological, CNS & ANS, cardio-vascular system, respiratory, nano therapeutics, computer aided drug designing, structural biology and many more research topics.

In addition, CSDD-2016 offers the advantage of the hospitality being offered in typical Scottish tradition; from a free Scottish airport transfer to Dundee and back and opportunities in our social programs which will include tasting local cuisine and participating to Scottish traditional music, Reception in Dundee City Chambers hosted by the Lord Provost, amongst many other activities in place for delegates.

The conference provides exciting opportunity to showcase the new technologies, the new products of the drug development companies and the service of the industry to the global audience. To register or learn more about the conference, please visit: http://drugdiscoverysummit.com/registration_form

Conference Proceedings
All accepted conference abstracts will be given a DOI number and published in a special issue of the open access journal BioDiscovery. In addition, full text papers will also be considered for the special journal issue.

About City
Dundee is called the “City of Discovery” in honor of the ship built in a local yard on Tayside, used by Captain Scott and Ernest Shackleton on their successful scientific expedition to the Antarctic (1901 – 04). In the future, however, the nickname may change to recognize the pioneering work done by the Drug Discovery Unit (DDU) in the University of Dundee. The DDU's ultimate aim is to find “effective targets and pathways” that eventually lead to the development of cures for killer diseases, in-house and in partnership with leading pharmaceutical companies.

About Organizer
United Scientific Group (USG), an expert-driven initiative led by the editor’s association and the advisory board which includes academicians, researchers, and industry leaders across various fields of research. USG provides broad range of services in the fields of science and technology including publishing, conducting world class scientific events, and holding highly interactive and proficient world forums. For more information visit: http://unitedscientificgroup.com/