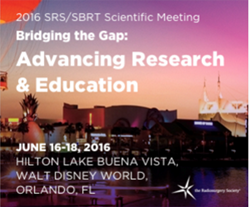 The Radiosurgery Society (RSS), a non-profit medical society dedicated to advancing the science and clinical practice of radiosurgery, announced today that it will host its annual scientific meeting, “SRS/SBRT Scientific Meeting 2016 - Bridging the Gap: Advancing Research and Education,” June 16 – 18, 2016 at the Hilton Lake Buena Vista in Orlando, Fla.

This year’s meeting will feature more than 100 clinical and medical physics presentations on the latest research on stereotactic radiosurgery (SRS), stereotactic body radiotherapy (SBRT), and multi-modality therapies to treat cancer, benign lesions and functional diseases. The meeting will include leading experts in radiation oncology, immunotherapy, neurosurgery, medical physics, and medical oncology from around the world.

A session jointly hosted by the RSS, National Institutes of Health’s National Cancer Institute, the Society of Immunotherapy for Cancer (SITC) and Radiation Research Society (RRS) will focus on the latest research involving immunotherapy and radiosurgery to treat cancer patients.

“One of the research areas of Vice President Biden’s National Cancer Moonshot Initiative is immunotherapy and combination therapies. Hypofractionated radiation is a potent modulator of the immune system. Combining radiation with immunotherapy is synergistic for management of solid tumors. Discussion and debate on topics of combining radiotherapy with immunotherapy are timely and pertinent to support this effort," said Mansoor M. Ahmed, Ph.D., Program Director, Radiotherapy Development Branch, Acting Chief, Molecular Radiation Therapeutics Branch, Division of Cancer Treatment and Diagnosis, National Cancer Institute, and a joint session co-chair of the meeting.

The meeting will also include a highly anticipated session, co-hosted by the American College of Radiation Oncology (ACRO) and the Radiosurgical Research Institute (RRI), dedicated to the use of SRS/SBRT for re-irradiation of intracranial lesions, head and neck tumors and recurrent breast cancers.

“With technological advancements in treatment planning, SRS/SBRT allows a safe and effective way to allow for local disease control where other treatment alternatives are limited,” said Dwight E. Heron, M.D., Director of Radiation Services at University of Pittsburgh Medical Cancer Center and Professor at the University of Pittsburgh Cancer Institute. “In this session, we will focus on dose parameters, normal tissue tolerance, local control and toxicity in the setting of re-irradiation.”

Topics for this year’s Showdown Debates will be “Ablative vs. Non Ablative Radiation for Abscopal Effects,” “Pre-Resection vs. Post-Resection SRS for Brain Metastases,” “SABR vs. Surgery for Operable Stage I Lung Cancer,” and “Hypo-Fractionated SBRT vs. Single Dose for Prostate Cancer.”

In addition to the medical physics presentations, there will also be a physics session dedicated to discussing current consensus guidelines for SRS/SBRT treatment, and a new Dosimetry Plan Study of SABR/SBRT for Prostate Cancer, in collaboration with the American Association of Medical Dosimetrists (AAMD).

Also new this year will be a Radiation Therapist Breakout Session and back by popular demand is the Performance and Quality Improvement Session (PQIS), where attendees have the opportunity to present and discuss challenging cases with their peers.

To register to attend the 2016 SRS/SBRT Scientific Meeting, go to http://www.therss.org
and click on the RSS Events page. Members of the RSS will receive a discount on registration.

About The Radiosurgery Society®

The Radiosurgery Society (RSS) – a non-profit, independent, multi-disciplinary organization of surgeons, radiation oncologists, physicists, and allied professionals, who are dedicated to advancing the science and clinical practice of radiosurgery. Originally formed in 2002 and becoming (501c6) in 2008, the Radiosurgery Society today (http://www.therss.org) represents approximately 600 members who perform stereotactic body radiotherapy and radiosurgery in hospitals and freestanding centers throughout the world.