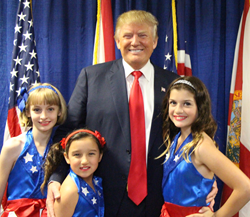 No matter who is elected president, Americans need to stand united in support, honor and celebration of freedom.

The USA Freedom Kids rocketed onto the scene with their performance at a Donald Trump Rally. Now, seeing other celebrities "threatening" to leave America if Donald Trump is elected, the group has decided to raise money to help them pursue their dream.

"Whether they realize it or not, they've renounced America and put a price on OUR country," says Jeff Popick, the group's manager, "while the rest of us know that freedom is priceless." So, for America and for these celebrities, we'd like to help them live their dream with a GoFundMe page to raise money for their moving expenses. And, yes, we're very serious, this will remain a land of dreams and of freedom."

"The KIDS are not political, but LOVE performing and LOVE freedom," insists Popick, "So we decided to have some fun, with our hit song, "Freedom's Call," which ultimately went viral because of a performance for Donald Trump.

The GoFundMe campaign states it will pay for moving boxes, moving trucks, freight shipping, and even one-way airplane tickets - FIRST CLASS - to any country the anti-Trump celebrities wish to go. With a proviso ... They agree to NOT return to the USA for the 8-year term that Donald Trump will be president. It also states it is has no affiliation with Donald Trump or the Donald Trump campaign.

"We're all entitled to support any nominee, and no matter who is elected, Americans need to stand united together in support, honor and celebration of freedom," insists Popick, "Celebrities "threatening" to leave America if Donald Trump is elected, should exercise their freedom, pursue their dream; and in the spirit of Ameritude, we want to help them do it"