The Carry The Load National Relay Kicks Off Today in Seattle. Who are you carrying? 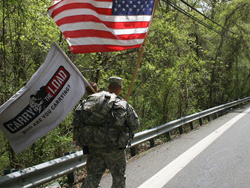 Though it’s a wonderful weekend to celebrate family and the freedoms we enjoy, the true purpose of Memorial Day calls all of us to ‘never forget to remember’ those who made the ultimate sacrifice for our freedoms.

What was meant to be a day of remembering the sacrifices of our fallen military service members and first responders has become a weekend of sales, barbecues and three-day vacations. Former Navy SEAL Clint Bruce rarely thought about it until he started to lose friends in combat.

“Though it’s a wonderful weekend to celebrate family and the freedoms we enjoy, the true purpose of Memorial Day calls all of us to ‘never forget to remember’ those who made the ultimate sacrifice for our freedoms,” says Bruce.

Five years ago Bruce and fellow Navy SEAL veteran Stephen Holley took it upon themselves to start Carry the Load as a way to restore the true meaning of Memorial Day and connect Americans to the sacrifices of military, law enforcement, firefighters and rescue personnel.

Starting April 27, the 33-day, 6,600-mile National Relay is comprised of a 2,300-mile East Coast route from West Point, NY to Dallas and a 4,300-mile West Coast route from Seattle to Dallas. It concludes with a 20-hour and 16-minute Memorial March in Dallas over Memorial Day weekend.The relay provides an active way for Americans to remember, honor and celebrate those who have made the ultimate sacrifice while protecting and serving our country.

Since 2011, more than 75,000 Americans have participated and helped to raise more than $6 million. Based on the number of National Relay teams, local events and sponsors signed up to date, Carry The Load is expecting to greatly exceed those numbers this year.

Visit CarryTheLoad.org to participate, volunteer or donate. Text “CARRY” to 243725 to help support our nation’s heroes. Join the conversation by following Carry The Load on Facebook, Twitter (@CarryTheLoad) and Instagram (@CarryTheLoad), and share who you are carrying with the hashtag #CarryTheLoad.