Pastor at The House of Yahweh has written a new publication this week shedding light on the terms BC, AD or AC traditionally understood to mean Before Christ (BC), After Christ (AD/AC). 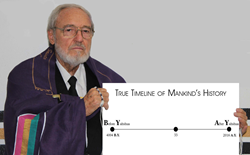 To start with, the Name of the Savior has nothing to do with the word “Christ”. His Name is Yahshua and that is a fact anyone can prove for themselves

Yisrayl Hawkins, Pastor and Overseer at The House of Yahweh in Abilene, Texas, has written a new publication highlighting inconsistencies of adding BC and AD, saying it is time to set the record straight. Traditionally, BC and AD has been referred to as Before Christ and After Christ. Yisrayl says this simply cannot possibly be true and offers explanation.

“To start with, the Name of the Savior has nothing to do with the word “Christ”. His Name is Yahshua and that is a fact anyone can prove for themselves,” Yisrayl states.

He continues in the letter laying the foundation for the Name Yahshua, and proves all the facts. He says since His Name is undeniably Yahshua, it makes no sense to refer to a time period using anything other than His Name.

Yisrayl strongly says the correct abbreviations for the time period referring to before and after the death of the Savior is correctly written as BY and AY meaning Before Yahshua and After Yahshua. The letter is not a quick- to-the-point explanation, instead it is a 21-page meaty publication leaving no stone unturned to back his points.

“The only true and sensible way to distinguish before and after in relation to time is before Yahshua (BY) and after Yahshua (AY). This man lived and died for the whole world. We cannot continue to dishonor Yahshua Messiah,” Yisrayl added.

He says he’s on a mission to clear this deception up worldwide, make it internationally known and change it. Yisrayl says by the time he’s done with his work, the whole world will know the truth.