New study by Psychtests.com sheds light on the emotional and behavioral responses of defensive vs. non-defensive employees when it comes to criticism. 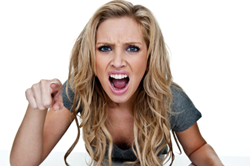 Defensive employees go through significant emotional upheaval when criticized, and may retaliate.

Anyone who hopes to move up the career ladder needs to be open to feedback, even if it’s negative – it’s a rite of passage.

With one-on-one performance reviews on the way out and 360 degree assessments making their way in, one thing certainly hasn’t changed when it comes to criticism and feedback at work: Not everyone can take it like a pro.

Researchers at PsychTests evaluated the emotional and behavioral responses of different employees to constructive feedback. What they discovered was that those who are defensive not only go through significant emotional upheaval when criticized, they also have a tendency to retaliate – either directly or in a passive aggressive manner - against their manager.

Collecting data from 454 employees who took their Sensitivity to Criticism Test, the researchers compared defensive and non-defensive employees’ response to negative feedback, revealing distinct differences between the two groups.

Researchers at PsychTests also discovered that defensive employees’ semblance of negativity wasn’t limited to performance reviews and feedback from their manager. Further investigation into the attitude and personality of the defensive group revealed a general abhorrence for anyone or any circumstance that made them feel weak or vulnerable. For example:

And compared to nearly all of the members of the non-defensive group (97%), only 58% of the defensive employees believe that improving on their weaknesses is worth the effort.

“Criticism is part and parcel of nearly all jobs, but anyone who hopes to move up the career ladder needs to be open to feedback, even if it’s negative – it’s a rite of passage,” explains Dr. Jerabek, president of PsychTests. “Employees who are unable to take criticism not only limit their potential for advancing their knowledge and skills, they also increase their chances of repeating the same mistakes and failures over and over because they refuse to change the way they work. This isn’t to say that all criticism is constructive and should be viewed as such; some colleagues, customers, and even managers, can be unnecessarily harsh. What people need to do is get to the core of the lesson behind the criticism, as there may be a grain of truth to it. Essentially, ignore the means but examine the intention: Rather than asking, ‘How could he/she say such a thing’, ask ‘Is there a kernel of truth behind the criticism, and what can I do to improve?’”

“Although managers can’t control per se how their employees respond to criticism, they can strive to improve the delivery of their feedback. That’s what makes 360 assessments so valuable: Employees will be receiving feedback not only from their manager, but also their peers and customers. So while they may be able to dismiss a criticism if it’s offered by one person, when it’s corroborated by others, it might open their eyes.”

How well do you take criticism? Check out: http://testyourself.psychtests.com/testid/2129

Professional users of this test can request a free demo for SCRT - R (Sensitivity to Criticism Test - Revised) or any other assessments from ARCH Profile’s extensive battery: http://hrtests.archprofile.com/testdrive_gen_1

Some people recognize the value of criticism, even when it’s negative. Others focus more on protecting their ego.Anyone who hopes to move up the career ladder needs to be open to feedback, even if it’s negative.