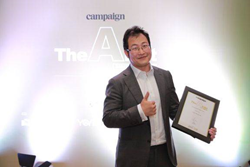 Here at FansTang, we believe excellent content happens when brand identity and message are seamlessly integrated into the content itself.

“I’m honored to be named amongst other distinguished nominees,” said Liu. “Here at FansTang, we believe excellent content happens when brand identity and message are seamlessly integrated into the content itself. And this is the content that will resonate with the audience on an emotional level.”

Liu joined FansTang in 2014 as business development director and was promoted to president of China operations in 2015. In his current role, Liu overseas all aspects of FansTang’s China operations, heading a team that developed and produced China’s most watched Hollywood news program, as well as localized and streamed over 40 major awards shows and other live events in China.

The team also created an award-winning, branded-content web series for Coca-Cola China’s 2015 summer marketing campaign, which starred Western celebrities in viral videos. Liu and his team leveraged data analytics and production capabilities, talent partnerships and a multi-platform social-media ecosystem of over 128 million followers, to produce exceptional results without an additional media buy. The campaign won gold at The Great Wall Award and The Chinese Element International Creative Award during the 22nd China International Advertising Festival in 2015.

FansTang CEO Adam Roseman commented, “ We would like to congratulate Indy on this fantastic news. He joined us with great expertise in digital content creation and localization strategy. With the substantial increase in our self-produced and licensed content portfolio, continued refinement and growth in our China operations will be crucial to our business’ unique position in one the world’s largest digital content consumer markets.”