Roadtrip Nation and KQED Announce Premiere of Being You, Presented by Understood.org 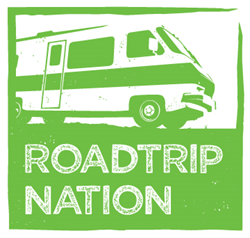 “ ‘No’ is the word that slows us down and stops us. If you’re saying yes, you’re moving,” Howie Mandel emphasized to the road-trippers.

“My biggest fear was telling people about my LD (learning disability), it’s the one thing I wanted to hide more than anything. Yet now, after this trip, I have never felt more empowered,” said Stephanie Whitham.

Whitham has non-verbal processing disorder, which makes understanding non-verbal cues like body language and facial expressions difficult. She felt very alone until she slowly began to find a community of her own while studying at the University of San Francisco. After her experience on the road, she is now determined to be as vocal as possible about her learning and attention issue to ensure people know that they are not alone and that there is a successful, engaged and supportive community of people like them.

Nicole Korber kept her dyslexia and dysgraphia a secret to many, fearful that she would appear weak. After proudly graduating from the University of Pittsburgh, Korber still felt weighed down by the expectations of others. The Being You journey fueled her with a newfound momentum as she conversed with leaders like Howie Mandel, who urged the road-trippers to look past the hesitation and stigma, and press on.

“ ‘No’ is the word that slows us down and stops us. If you’re saying yes, you’re moving,” Howie Mandel emphasized to the road-trippers.

Noah Coates joined the Being You journey the summer before his first year of college at Stevenson University. At the young age of 18, Coates was determined; he knew that he was smart and creative and that despite his ADHD and dyslexia, there should be career opportunities out there that could pair well with his strengths and interests -- he just needed to find them. After his many conversations and experiences, he is now eager to start a movement at his own university to empower students in his shoes.

Being You premieres May 3, 2016 through KQED. Viewers can access local PBS listings for air times of Being You or can view the film online at http://www.BeingYouFilm.com.

About Understood.org
Understood.org is a comprehensive free resource created by 15 nonprofits to empower parents of the 1 in 5 children in the U.S. who have learning and attention issues. Available in English, Spanish and read-aloud mode, Understood offers personalized resources, interactive tools, daily access to experts, a supportive community of parents and more. Since its October 2014 launch Understood has helped more than 11 million unique visitors. With clear explanations and practical tips, Understood is helping parents gain confidence and unlock strengths that can help their children thrive in school and in life.

About KQED
KQED (kqed.org) has served Northern California for more than 50 years and is affiliated with NPR and PBS. KQED owns and operates public television stations KQED 9 (San Francisco/Bay Area), KQED Plus (San Jose/Bay Area) and KQET 25 (Watsonville/Monterey); KQED Public Radio (88.5 FM San Francisco); kqed.org and KQEDnews.org; and KQED Education. KQED Public Television, one of the most-watched public television stations in the country, is the producer/presenter of national programs such as Sound Tracks; California Forever; and Essential Pépin. KQED Public Radio is the most-listened-to public radio station in the nation and the most popular in the Bay Area. Visit http://www.kqed.org for more information.