Changes to ICF Coach Certifications make now an important time to sign up for coach training. 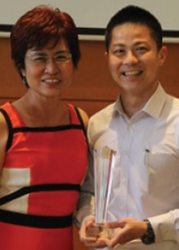 Academy of Leadership Coaching & NLP (ALCN) announces big changes to ICF Coach Training Certifications coming this fall, making this year's Summer Intensive Program among the last chances to get certified before these changes occur. The changes, will include the elimination of becoming a MCC or PCC coach retroactively based on a coach’s hours conducted throughout a coaching career. With that, Helen Attridge, President of ALCN, strongly encourages prospective students to sign-up for the Summer Intensive program soon.

According to Attridge, the program does not just attract students looking to start a career in coaching, it is also relevant for students who seek to take these skills back into the workplace to create a coaching culture. She shares the story of former intensive graduate, Suhendra Cheng as an example of the power of the coach training program.

In 2006, Cheng was looking for a key skill that could help him stand out in the competitive Chinese job market. Because he was not native to China, he faced many challenges, (99% of organizations were seeking Chinese employees). This is when he started looking for skills that would set him apart from the competition. His search led him to ALCN and their Coach Training Program. Cheng used his coaching certification to offer free coaching services to Nestle, China, which employs 50,000 of the organization’s 250,000 employees worldwide. This “after hours” coaching eventually opened the door for a corporate role within Nestle with the organization’s Corporate Development Team and he went on to be part of the roll out of coaching in one of the top 5 Food & Beverage (FMCG) companies in China.

Cheng notes that his success can be directly attributed to the coach training he received from ALCN. “ALCN’s NLP Coach Certification definitely opened all kinds of possibilities for me professionally, achieving goals one step at a time and taking actions in the direction that I had chosen. I have use a lot of the NLP Coaching skills I learnt with myself to achieve both personal and professional goals.”

Stories like this make Attridge and her team at ALCN, even more resolute in what they do. Not only do they give individuals the opportunity to expand their possibilities through Coach Training Programs like the Summer Intensive, their team (as well as many of their graduates) are called upon regularly by top companies, worldwide, to help develop a coaching culture within a corporate structure through corporate coaching programs. "There has never been a more important time to get coach training. I hope that anyone who is on the fence will use the ICF changes as a reason to start following their dreams." Attridge concludes.