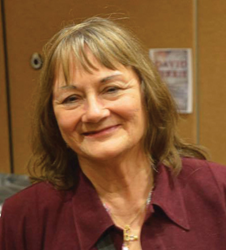 The other time I saw Rafaolo was when Lee and I were walking through Lafayette Park near Banister’s office. Lee spotted Rafaolo and said, ‘There goes Rafael the Archangel.’

TrineDay author, Judyth Vary Baker, an eyewitness, spoke out recently to help identify a man in a historic photograph that is the center of controversy about Ted Cruz’s father Rafael.

The April 20, 2016, National Enquirer’s claim that Rafael Cruz was with Lee Harvey Oswald in a photo taken in front of the International Trade Mart in New Orleans on August 16, 1963 stirred controversy in the Republican Presidential Primary and across the Internet. It also prompted an eyewitness to speak up. Rafael Cruz is the father of U.S. Senator Ted Cruz. Lee Harvey Oswald was later accused of assassinating President Kennedy in Dallas.

After seeing the National Enquirer article, author Judyth Vary Baker was interviewed by Kris Millegan, the publisher at TrineDay, about what she personally saw and heard that day. “I saw Rafaolo with Lee in front of the ITM. I was no more than 6 feet from him and saw him clearly, but I did not know his last name. Lee only told me his name was ‘Rafaolo,’ and that he was there to watch Lee’s back in the event there was trouble. The cover story was that Lee hired Rafaolo to help hand out FPCC flyers, but he was really there for Lee’s protection. Lee also told me that both he and Rafaolo pretended to be pro-Castro to flush out Castro sympathizers for ex-FBI agent Guy Banister,” said Judyth Vary Baker in an interview with her publisher Kris Millegan this week.

Judyth detailed her relationship with Lee Harvey Oswald in her 2010 autobiography “ME & LEE: How I came to know, love and lose Lee Harvey Oswald.” Lee and Judyth both worked at the Reily Coffee Company in New Orleans in 1963. Lee found an apartment for Judyth and helped her get her job at the coffee company. They both started working there on May 10th, and they rode the same bus to and from work together on a daily basis. By August 16th, both had been fired from Reily, but continued to see each other and to work together on a secret anti-Castro project with several New Orleans doctors. Her comments about Rafaolo are new.

“The other time I saw Rafaolo” Judyth told Millegan, “was when Lee and I were walking through Lafayette Park near Banister’s office. Lee spotted Rafaolo and said, ‘There goes Rafael the Archangel.’ That's when Lee told me that Rafaolo was one of the Cubans whose parents were still in Cuba, so Lee could not trust him because Castro might be able to pressure Rafaolo into spying by threatening his parents.”

Millegan said “We were very familiar with that photo long before the National Enquirer broke the Rafael Cruz article. It’s from the Warren Commission, and we have used it in three books. One of our authors, Chauncey Holt, was even in the same photo and identified two of the other men in his book which said that these men were working with him as part of the CIA’s Operation Mongoose which armed anti-Castro Cuban groups.”

The photos in question were taken by WDSU-TV on August 16, 1963. In the following days, Oswald appeared on several radio talk shows on WDSU radio. The photo was included in the following books published by TrineDay Press:

Me & Lee book coverCover of Me & Lee

Self-Portrait of a Scoundrel