“What Do You Push For?” Is Fundraising Challenge for Participants Supporting Active Military, Veterans and their Families 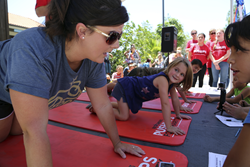 “What do you push for?” is the question thousands of Americans will be challenged to answer around the country when they "push" against friends, family, and co-workers in Boot Campaign’s annual Pushups For Charity initiative that kicks off Armed Forces Day, Saturday, May 21. Steve Weatherford, a Super Bowl Champion, 10-year NFL player, Fitness Expert and TV Personality, will serve as Boot Campaign's Pushups For Charity spokesperson.

The military nonprofit’s major fundraising campaign which officially runs through Veterans Day, Nov. 11, was created to increase awareness of the challenges military service members and veterans face, and raise funds to support their unique needs. The nearly seven-month campaign gives individuals, gyms, churches, businesses, and clubs across the U.S. a chance to serve those who serve by hosting local Pushups For Charity events, racking up pushups and funds in support of Boot Campaign.

Pushups For Charity 2016 hopes to raise $1 million, equating to more than 500 individual grants that will support veterans, service members, and their families. Boot Campaign assistance grants are available to military families of all generations and help with housing, career and education expenses, and PTSD/TBI treatment.

Boot Campaign encourages all of America to become involved in one of three ways:
1. Lead a team - Plan an event and enlist family, friends, co-workers.
2. Join a team - Teams are organized by city and state.
3. Donate - If you cannot push physically, push financially.

Complete registration details for participation and/or donations are available online at: http://www.Bootcampaign.org/PushupsForCharity.

"I’m honored to have the opportunity to help the Boot Campaign with their Pushups For Charity initiative,” says Super Bowl Champion and 10-year NFL player, Steve Weatherford. “This combines two of the things I am most passionate about; Fitness and our Veterans. I’m honored and thankful to leverage my position of influence to aid the Boot Campaign in supporting our Vets and providing them with the services and support they need.”

“We are calling for people of all ages who can do a pushup to take part in Pushups For Charity to support our nation's heroes and their families,” says Boot Campaign CEO Robyn Payne. “We need everyone’s help to raise awareness and enough funds to reach our goals. Every person can make a huge difference just by doing pushups, and has the power to change a life in 90 seconds.”

Hundreds of Pushups For Charity events will be take place in 2016 where individuals complete as many pushups in 90 seconds as they can. This 90 seconds gives them a first-hand taste of what service members endure their entire military career, and allows them to show their support of the 1.36 million active duty men and women and 22 million veterans. Many participants will pledge a dollar amount per pushup, others will give an amount that speaks to them, but all donations will change the lives of heroes that protect our freedom.

Boot Campaign has improved opportunities for individuals and teams to participate, bolstering its program support in 2016 with the following enhancements:

The 2016 initiative will get off to an early start thanks to Microsoft Corp. and Zappos.com events prior to the May 21 Armed Services Day launch.

Boot Campaign awards prizes to the leading participants with the most successful events from around the country based on total funds raised. In the Winner’s Circle last year was Wholesale Capital Corporation (Moreno Valley, Calif.), the top overall fundraiser in its first year as a team. Total Quality Logistics (Cincinnati, Ohio) also shattered the Guinness World Record for the most people doing pushups at one time with more than 700 participants.

Pushups For Charity is Boot Campaign’s largest annual fundraiser, and was a substantial part of the military nonprofit’s record-breaking year in 2015, where 83 percent of every dollar raised went to its mission.

About Boot Campaign
Established in 2009, Boot Campaign is a national 501(c)(3) charitable organization dedicated to promoting patriotism for America and our military community; raising awareness of the unique challenges service members face during and post-service; and providing assistance to military personnel, past and present, and their families. Retail sales of combat boots, apparel, and mission-focused merchandise, general public donations, and corporate sponsorships fund programs that support military families. Learn more at http://bootcampaign.org and join the #BootsOn community on Facebook, Twitter, and Instagram @Bootcampaign.
# # #