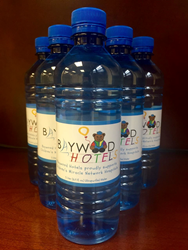 Recognizing the needs of these children and their families made it an easy choice that Children's Miracle Network Hospitals should BEAR the fruit of our first national fundraising campaign.

Officially launched in December 2015, Miracle in a Bottle is Baywood Hotels’ first company-wide fundraising effort, as each of its hotels also performs local charity work. BEAR-branded bottled water is currently and exclusively sold in the company’s hotels’ on-site markets and at the front desk to guests, clients and staff for $2 per bottle. All profits, averaging $1 per bottle sold, will be donated to hotels’ local Children's Miracle Network Hospitals locations. In the first quarter of 2016, over 20,990 bottles of water were sold, raising $21,000 for donations.

“The culture at Baywood Hotels has family at it's core,” said Chief Operating Officer Rick Fenstemaker. “Recognizing the needs of these children and their families made it an easy choice that Children's Miracle Network Hospitals should BEAR the fruit of our first national fundraising campaign.”

Of national charities to raise funds for, Children’s Miracle Network Hospitals was selected to benefit from Baywood Hotels’ national fundraiser because of its impact on several Baywood associates and their families. Some general managers working for Baywood Hotels had personal experiences with Children’s Miracle Network Hospitals, receiving the organization’s assistance and support in crises. The decision for the bottled water to fundraise for Children’s Miracle was a collective decision made by the management company’s 85 general managers.

“We’re grateful to be the recipient of the first company-wide giving campaign at Baywood Hotels,” said Children’s Miracle Network Hospital president and CEO John Lauck. “With more than 10 million kids treated at a CMN Hospital every year, the need of community donations is vital. Thanks for making miracles happen for local sick and injured kids.”

For more information about Baywood Hotels’ Miracle in a Bottle fundraiser or other BEAR initatives, contact Rick Fenstemaker at 301-389-3836 or visit http://www.baywoodhotels.com/community.

About Baywood Hotels
Established in 1975, Baywood Hotels, Inc. is a fast-growing and privately-owned hospitality management company operating $1 billion in assets and employing over 1,800 associates nationwide. The company is headquartered in Greenbelt, MD, and has regional offices in Aurora, CO; Herndon, VA; Miami; Pittsford, NY and San Antonio. In each of its regions, the private hotel ownership company is consistently recognized as an innovative leader in the hotel industry, focusing on product concept and development and the outstanding management of its assets. The focused vision, strong values and aggressive long-range strategy of Baywood Hotels have helped the company develop reputable and well-branded hotels in areas where Baywood has competitive expertise and partnerships. Baywood Hotels’ portfolio includes well-known brands, such as Marriott, Hilton and InterContinental Hotels Group, as well as several independent brands. Visit the Baywood Hotels website or find us on Twitter or Facebook.