Greg MacDonald pens exciting, relatable story to answer the questions that everyone asks about God’s presence on Earth 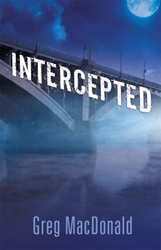 I want readers to know that God is real.

Greg MacDonald’s new book, Intercepted, ($14.99, paperback, 9781498473187) is a gripping story about a non-believer named Nick – a story that presents the truth claims of Christianity in a way young Christians can clearly understand, remember and talk about. Nick’s life is uncomplicated: ride his Interceptor, finish college, and hang out with friends. He had life figured out and can always get what he wants – well, almost. His childhood friend, Maria, remains outside his grasp but that is okay because she is a Jesus freak. So Nick continues on his path – with no idea that his life and soul – are in danger. One fateful decision on a snowy road will change Nick’s life. He will have to look inside of himself for answers: what did he really believe? Did God talk to him through the only people who could possibly convince Nick to change? Uncovering layers of knowledge, the truth is revealed. How can Nick go back to his old life after it has been INTERCEPTED? The story in this book presents an organized way for Christians to think about their faith and to talk about it with nonbelievers

“I want readers to know that God is real,” states the author. “Evidence for his existence surrounds us. Christians can be confident in their beliefs and be equipped to defend their faith in a secular society.”

Greg MacDonald is a husband, father, and businessman who grew up in the church, left it during his teens, and then, at the age of thirty-three and after a careful study of the validity of the Christian faith, gave his life to the Lord. He has a Master of Science degree in Management from the University of Idaho and a Bachelor of Science degree in Business from Purdue University. He owns and operates Sage Insurance Advisors, LLC. He is the founder of The Alliance for Seniors, board president of Northeast Indiana Long-term Care Ombudsman program, and past president of the Roanoke, Indiana Chamber of Commerce. He worked as a volunteer with high school and college youth groups for nine years. He listened and discussed the questions teens and 20-somethings had regarding Christianity. He understood their objections because when he was their age, he had many of the same objections. Greg has also studied apologetics, which he taught to adult Bible Studies. After writing Intercepted, he gave the book to several pastors and the past president of a Christian college to review and critique. All confirmed its theological accuracy.

Xulon Press, a division of Salem Media Group, is the world’s largest Christian self-publisher, with more than 15,000 titles published to date. Retailers may order Intercepted through Ingram Book Company and/or Spring Arbor Book Distributors. The book is available online through xulonpress.com/bookstore, amazon.com, and barnesandnoble.com.