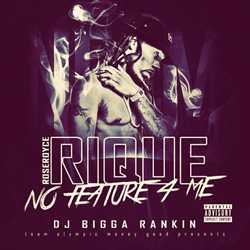 About Rose Royce Rique: Clyde Al' Tarqiue Turner, known too many as Rose Royce Rique, is a 28 year old up-and-coming Hip-Hop artist who is proving to be a force to be reckoned. Dripping in talent and armed with a raw desire to speak and influence, Rique is one of North Carolina's most talented rising artists. He maintains a strong sense of self-confidence, as well as a calm and collected demeanor which makes him more relatable to his audience, as well as catches the attention of any female when he enters a room. He is well on his way to the path of success. With bangers like "What I Wanna", and ballads over beats with lyrics that resemble spoken word, he covers stories from his childhood, relationships, street life and redemption. Rique is a native to Asheville, NC, a town known for its art, luxury and poverty stricken areas. It is true rags and riches kind of town. It is a money making city on both sides of the tracks with prominent poverty peeking through the Biltmore Facade. His lyrics portray the hustle and grind for those who are less fortunate than those of an affluent lifestyle. He was forged there, running with cousins, being influenced by gangs and attending school all while being raised by a single mother. Having grown up with his two brothers and a circle of trusted individuals led Rique to the development of his first attempt at formulating a rap style and group. Family has always been a stable foundation and he ran thick with other members who also aspired to break into the music industry. He grew up surrounded by music and loving it. His lyrics are centered around his childhood experiences and incidents he was exposed to while running the streets of Buncombe County. In High School he relocated to Charlotte, NC, where he honed his rap skills by visiting the cities hottest spots that hosted artist showcases and performed at clubs. There he would battle local artists and begin to create his persona. He soon after began to regularly hit the studios. After investing so much into his rap career, Rique decided to chase after music with a deeper passion than ever before. Not only is it his dream, but his ability to re-imagine life experiences over a soundtrack of guttural beats is sure to be a breath of fresh air in an industry that lacks not only creativity but also sincerity. When asked, his reply was that he is not in any particular genre of rap, and has yet to dedicate himself to a particular style. He credits Tupac as being his primary inspiration and says he would love to work with Dr. Dre one day. Lyrically he doesn't compare his self to any other artist, but if asked his answer would be he is comparable to both Andre 3000 and Wale. Rique has also taken a great liking to artists such as Childish Gambino, Chance The Rapper and Kendrick Lamar. With his new mixtape release entitled "No Feature 4 Me", be on the look out for more from this next generation up-and-coming artist. For more info on Rose Royce Rique, be sure to visit his Facebook fan page.