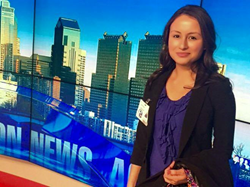 I could not have achieved this without the support of everyone at Connecticut School of Broadcasting - Cherry Hill, NJ."

When Paola Nunez was a little girl, she used to watch the Spanish version of Good Morning America (¡Despierta América!) with her Mom, and daydream about being a part of a show like that. Well now she is! Nunez recently had this to say, "I am very overjoyed to announce that I recently landed a position as an Associate Producer at Disney's 6abc in Philadelphia, and I could not have achieved this without the support of everyone at Connecticut School of Broadcasting - Cherry Hill, NJ."

Tired of waitressing at a local restaurant chain, Nunez decided to finally follow her dream and attend a Connecticut School of Broadcasting Studio Tour where she was hooked! Shortly after graduating, she landed a position as the weekend Master Control Operator for WPPX - ION Networks Television, Channel 61 in Philadelphia. There, she had the opportunity to learn even more about broadcast television and FCC regulations. She also sought the guidance of Cherry Hill Campus Director, Tom DeFranco & Campus Coordinator, Brian Fish to help her find freelance video production work at Survey Magazine in Philadelphia. This quickly turned into a full time position as Media Director, and gave Paola the experience she needed to answer the call from 6abc just a year later. That, and a little help from Connecticut School of Broadcasting/Cherry Hill broadcast journalism instructor, Bob Salter, who helped her prepare a creative and well representing cover letter and resume that stood out. Nunez is elated, "Now, I get to help one of the highest ranked stations in my area create content that attracts audiences, both on television screens and digital platforms. I couldn't be happier!"