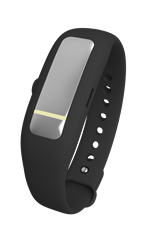 Many professionals have dreamed of having this type of awareness bracelet for years to help people with hair pulling, nail biting, and other similar behaviors. It also has huge potential for future research.

Today HabitAware launched a pre-order campaign for its flagship product - a smart bracelet called Liv, that is aimed at managing Body Focused Repetitive Behaviors (BFRBs) like hair pulling disorder (trichotillomania), nail biting (onychophagia), skin picking (excoriation disorder, previously dermatillomania), and thumb-sucking. It is now available for pre-orders on their website for $99. Two percent of pre-order sales during the first 60 days will be donated to the TLC Foundation for Body Focused Repetitive Behaviors in support of further research and education.

Cognitive Behavioral Therapy (CBT) has been the gold standard for treating these disorders. It involves habit tracking via journalling to identify and analyze patterns and triggers. Liv is the first successful device to help automate this process.

“Liv uses sophisticated sensors to record the behavior patterns of the user,” said HabitAware Co-Founder Sameer Kumar. “It identifies these unhealthy behaviors and alerts you when you’re doing them. It’s also able to distinguish between similar movements - for example, pulling hair from your scalp versus taking a sip of coffee.”

Among the other distinguishing features of Liv, it:

The inspiration to create Liv is deeply personal. Co-Founder Aneela Kumar has trichotillomania and has been pulling out the hair from her eyebrows and eyelashes for the past 20 years.

“For most of that time, I thought I was the only one who did that,” she said. “Three years into my marriage to Sameer, I finally shared my secret with him, and we set out to solve my trich together. Liv has helped me so much in just a few months and has given my hair time to regrow. I’m convinced it has the power to help others as well.”

The HabitAware team is composed of experts in the areas of electrical engineering, mobile app design, and software/firmware engineering. Their advisory board includes Dr. Carol Novak, Founding Director of the Scientific Advisory Board of the TLC Foundation for BFRBs.

“This technology is a breakthrough. Many professionals have dreamed of having this type of awareness bracelet for years to help people with hair pulling, nail biting, and other similar behaviors. It also has huge potential for future research.” said Dr. Novak.