Holocaust memorial events remind us to honor those who survived, remember those who perished, educate ourselves regarding the signs of impending genocide, and engage our hearts to say, "Never again!" 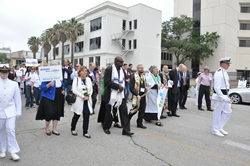 'This impacted my life by teaching me to speak out towards discrimination and to always forgive others.' — Anastasia Kravchenko, winner of March of Remembrance Scholarship

From April 16 to May 7, five March of Remembrance events took place in the greater Houston area as local community members and leaders gathered to hear firsthand accounts of Holocaust survivors, WWII liberators, and descendants of Nazi officers. Each event began with a host church’s opening service, followed by participants marching together in support of this year’s theme, “Don’t Stand By.”

Other speakers included 94 year-old WWII veteran Birney (Chick) Havey, a liberator at Dachau; Dr. Joan Samuelson, Lone Star College; and David Lawhon, descendant of a WW2 liberator, associate professor of Holocaust studies, and advisor for TAMUG honor students. Dr. Franziska Eckert and Claudia Kiesinger, third generation descendants of Nazi officers, shared their experience of discovering their grandfather’s wartime activities, after years of family silence, and expressed their immense grief and remorse for the crimes of their family members. They voiced their love for Jewish life and spoke and committed never to be silent regarding anti-Semitism.

In Bellaire, the host pastor was Rev. Kristy Vits, of Christ Church Presbyterian. She was joined by Doug Stringer, founder of Somebody Cares, International, and Gladys Seahorn, pastor of City of Refuge Global Outreach Ministry. Participants marched to Congregation Brith Shalom, where they attended the Citywide Yom HaShoah Commemoration (annual memorial of the Holocaust), presented by the Holocaust Museum Houston. The Hempstead march, hosted by Pastor Fred Thomas III of St. Peter’s Missionary Baptist Church ended with prayers at the local Jewish cemetery.

The March of Remembrance was brought to the U.S. following the March of Life initiative, founded by Jobst Bittner from Tübingen, Germany in 2007. In recent years, memorial and reconciliation marches have been held all over the world, some lasting for several days and covering thousands of miles. The March of Remembrance U.S. is taking the lessons of the Holocaust to break the silence of fear, pain, and shame caused by prejudice and indifference.

More than 70 years after the end of the Holocaust, xenophobia, nationalism and anti-Semitism are on the rise again in Europe, unlike anything seen since the 1930s. March of Remembrance is calling churches and congregations to hold annual memorial marches in cooperation with the Jewish community around the time of Yom HaShoah in U.S. communities.

See clips from the March of Remembrance Houston here

People of all ages and backgrounds unite to remember