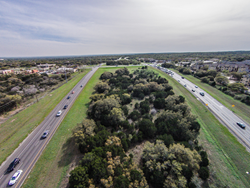 South Mopac looking south at the Slaughter Lane intersection. The 2.1 mile "Mopac Intersections" piece of the 17-mile tolled loop would add six freeway lanes within the green median shown above.

“Much of late first lady, Lady Bird Johnson’s conservation legacy is under potential threat of over-pavement, pollution, and ugly-fication at the hands of TxDOT and the Federal Highway Administration,” said Jerry Jeff Walker.

Jerry Jeff Walker, the Texas country music legend, is one of 12 plaintiffs in a lawsuit filed in late February against Texas Department of Transportation (TxDOT), and TxDOT’s partner, a regional toll road agency called the Central Texas Regional Mobility Authority (Case 1:16-cv-00234, U.S. District Court for the Western District of Texas, Austin Division). The suit seeks a comprehensive environmental study before building any part of a 17-mile tolled loop project, that the suit charges could cause environmental and economic damage to the City of Austin. It also seeks to protect the Lady Bird Johnson Wildflower Center founded by the First Lady, and renowned actress Helen Hayes, in 1982 to protect native plants and natural landscapes, and many of Austin’s iconic natural and cultural treasures.

One of the lawsuit plaintiffs, The Friends of the Wildflower Center, a group of volunteers who are independent of the Wildflower Center, is launching an online petition to Texas Governor Greg Abbott urging him to step back from the tolled loop plan and instead convert an existing, under-utilized tolled loop on the east side of Austin, State Highway 130, into a free road. They believe this would provide an immediate solution to the congestion that often chokes I-35 as it passes through central Austin.

“Much of late first lady, Lady Bird Johnson’s conservation legacy is under potential threat of over-pavement, pollution, and ugly-fication at the hands of TxDOT and the Federal Highway Administration,” said Jerry Jeff Walker.

The late first lady, Lady Bird Johnson, championed passage of The Highway Beautification Act. This was her legacy to limit highway billboards and protect scenic landscapes along our highways. The landmark law came to be known as “Lady Bird’s Bill.” President Gerald Ford recognized her with the Presidential Medal of Freedom for this work.

If built, this highway project would direct Interstate 35 traffic past the Wildflower Center and on to Austin’s west side commuter highway, known as MoPac for the Missouri Pacific rail line it traces. It would add six lanes of traffic adjacent to the Center: the suit alleges that this would add noise, air, water, and visual pollution to the Center’s tranquil, 279-acre gardens and trail system. A heavily-lit, elevated interchange just south of the Center would be visible from the Center and its gardens.

Ms. Keeton, who was elected State Comptroller as a Republican and later ran major breakaway campaign for Governor as an independent, said: “I cannot stand by and watch this happen to Austin High, Lady Bird Lake, Zilker Park, Barton Springs, the Wildflower Center and our city with a second Interstate 35 through Austin.”

Attorney and Executive Director of Save Our Springs Alliance, Bill Bunch noted, "In early 2015, when TxDOT and the CTRMA first unveiled plans for the more northern piece of the proposed tolled loop, the locals woke up and took notice. It showed schematics of a 1.4 mile long toll bridge elevated above the existing Mopac bridge over Lady Bird Lake and Austin’s famed Zilker Park. The added lanes and elevated “direct connector” bridge to downtown would sit directly on top of Austin’s celebrated Lady Bird Lake hike-and-bike trail, and would wrap around Austin High School.

TxDOT’s own I-35 Corridor Advisory Committee recommended the same solution as the Friends of the Wildflower Center in its August 2011 recommended plan (See Executive Summary, p. ii). With Texas voters approving more highway funds for Texas the last two years, Texas House Transportation Committee Chair Joe Pickett recently picked up the proposal to remove the tolls on the SH 130 eastern bypass and make it a free, substitute I-35. “Making SH 130 free would provide immediate relief for I-35 congestion,” added Walker. “It would help steer regional development east of I-35, where we want it to go, and away from the Hill Country. It makes perfect sense.”

About Keep Mopac Local Coalition:
The Keep Mopac Local Coalition is made up of local environmental and water rights groups, Save Our Springs Alliance, Save Barton Creek Association and the Austin Group of the Sierra Club, Their mission is to stop the first piece of the 17-mile tolled loop, a proposed 3.6 mile State Highway 45 Southwest toll road, from crossing over the porous, cave-forming limestone that feeds water into Austin’s iconic Barton Springs.

Barton Springs Pool, located in Zilker Park, in the heart of Austin, is fed by the cold, clear waters of Texas' fourth largest spring.

Artist rendering of proposed double-deck bridge that would be added to the existing Mopac bridge over Lady Bird Lake.

U.S. Fish & Wildlife Service explains how pollution from highways are one of the factors that threatened the survival of the Barton Springs salamander's habitat.

U.S. Public Interest Research Group listed the SH 45 SW piece of the tolled loop as one of the nation's top “highway boondoggles.”