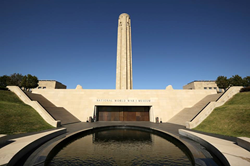 The National World War I Museum and Memorial is America’s leading institution dedicated to remembering, interpreting and understanding the Great War and its enduring impact on the global community.

The Museum is positioned to significantly expand its role as an international leader to forge a greater understanding surrounding conflict, peacemaking and the ongoing lessons of the Great War.

On Memorial Day, Kansas Citians will gather at the National World War I Museum and Memorial to honor the fallen — those who boldly responded to the call to duty to defend and protect liberty. To expand its capacity to honor their sacrifice, the Museum recently launched the “Call to Duty” Centennial Capital Campaign. The Museum is pleased to announce Kansas City’s philanthropic leaders have generously responded, contributing more than $12.5 million to support the “Call to Duty” campaign initiatives, including constructing a new exhibition gallery, renovating existing outdoor space and the J.C. Nichols Auditorium, expanding education and community programs, and increasing the Museum’s endowment.

“We are humbled by the tremendous generosity of the philanthropic community that will enable the National World War I Museum and Memorial to do more to remember those who served, and to expand our role as America’s leading institution dedicated to interpreting, understanding and remembering the Great War and its enduring impact,” said Dr. Matthew Naylor, President and CEO of the National World War Museum and Memorial. “Because of their exceptional support, the Museum will break ground on a new gallery that will give us the capacity to bring special exhibitions to Kansas City that would otherwise not come here, with rare objects never seen before in the United States. The Museum will also be able to expand our educational and community programs while increasing our international footprint with digital educational programming and global partnerships.”

Gifts totaling more than $12.5 million to support the Museum’s “Call to Duty” Centennial Capital Campaign include:

“Call to Duty” Centennial Capital Campaign Leadership
The Museum is proud to announce the “Call to Duty” Centennial Capital Campaign’s National Honorary Chair: General Richard Myers, former Chairman of the Joint Chiefs of Staff. Gen. Myers, a retired four-star general in the United States Air Force, served as the 15th Chairman of the Joint Chiefs of Staff (2001-2005). As chairman, Gen. Myers was the highest-ranking uniformed officer of the United States' military forces. The Kansas City native is a 1965 graduate of Kansas State University. Since his retirement from the military, he has served as a professor of military history and leadership at Kansas State University, and in April, he was named interim president of Kansas State University.

Gen. Myers will be a featured speaker at the Public Memorial Day Ceremony at 10 a.m. on Monday, May 30, at the National World War I Museum and Memorial. The Museum also announced its slate of Kansas City corporate and civic individuals leading the Museum’s “Call to Duty” Centennial Capital Campaign:

“The tremendous commitment of the Kansas City philanthropic community has been extraordinary,” said Thomas Butch, Museum Board of Trustees chair and “Call to Duty” campaign co-chair. “As we did in 1919, Kansas City will once again lead the nation in the sacred work of remembering and honoring those who served, through the expansion of our world-class Museum and its digital initiatives to reach millions around the globe.”

The Missouri Development Finance Board (MDFB) also awarded the Museum $1.8 million in tax credits to support the project.

In addition to the new exhibition gallery, renovation of outdoor space and enhanced educational programming, the “Call to Duty” campaign will include:

The Museum is preparing to lead the nation in the centennial commemoration of World War I when the focus of global attention turns to the U.S. engagement that started 100 years ago in 1917. “The Great War changed everything with more than 37 million casualties. It ushered in a century of profound social and economic change. The Museum tells this global story,” Naylor said. “The Museum is positioned to significantly expand its role as an international leader to forge a greater understanding surrounding conflict, peacemaking and the ongoing lessons of the Great War.”

“As we commemorate Memorial Day, we extend our gratitude to those who are extending the legacy of the fallen by strengthening the work of the Museum. We invite the community to join us in this important work,” Naylor said.

The public is welcome to make contributions to the Museum’s “Call to Duty” Centennial Capital Campaign by visiting theworldwar.org.

The National World War 1 Museum offers nearly 10 events over the weekend for people of all ages and interests, including a free public ceremony at 10 a.m. on Memorial Day.

Inscription at base: "In Honor of Those Who Served in the World War in Defense of Liberty and Our Country.

The National World War I Museum and Memorial is America’s only museum dedicated to examining the personal experiences of the Great War and its enduring impact.