Jesuits in U.S. and Canada to Ordain 20 New Priests 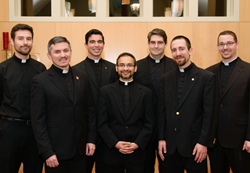 A few of the Jesuits being ordained this year gathered at the Boston College School of Theology and Ministry.

“This is a joyful time of year for the Jesuits because we are celebrating the ordinations of so many fine men to Jesuit priesthood.” —Fr. Timothy Kesicki, S.J., president of the Jesuit Conference of Canada and the United States

This month, the Society of Jesus, better known as the Jesuits, the largest order of priests and brothers in the Roman Catholic Church, celebrates the ordination of 15 new priests in the U.S. Four more are being ordained in Haiti and one in Canada. (Editor’s Note: Video interviews and photos available at http://www.jesuits.org/ordinations.)

The new priests hail from across the U.S. and around the world. Before entering the Jesuits, they worked in a variety of fields. Kevin Spinale, S.J., 37, volunteered with the Peace Corps in Romania; Andrés Vall-Serra, S.J., 38, served in the Navy for three years; Javier Díaz, S.J., 42, was a doctor; and Paul Robson, S.J., 37, worked in a group home for the handicapped.

Their call to Jesuit priesthood required them to undergo extensive training from the moment they entered as novices to their ordinations, a process (formation) that can take anywhere from eight to 12 years. As part of their formation, all ordinands earn advanced degrees from Jesuit universities and serve at Jesuit high schools and colleges worldwide.

“This is a joyful time of year for the Jesuits because we are celebrating the ordinations of so many fine men to Jesuit priesthood,” Fr. Timothy Kesicki, S.J., president of the Jesuit Conference of Canada and the United States, said. “During the ordination ceremony, the bishop says, ‘May God who has begun the good work in you, bring it to completion.’ There’s something special about seeing our newly ordained Jesuits as they begin their priestly work for the people of God.”

The first ordination Mass was held on May 21, 2016, at Our Lady of Lourdes Parish in Toronto. Additional ordinations will take place on June 4 and June 11 at the Church of the Gesu in Milwaukee; Fordham University Church in the Bronx, New York; St. Aloysius Gonzaga Parish in Spokane, Washington; St. Francis Xavier College Church in St. Louis; and the Chapelle des Frères de l’Instruction Chrétienne in Port-au-Prince, Haiti.

As new priests, they will continue their lives of service by engaging in pastoral work; teaching at Jesuit universities and high schools; continuing their studies; and working at Jesuit parishes.

The 20 Jesuit priests being ordained this year are:

Jason E. Brauninger, S.J., 34, is from St. Rose, Louisiana. He trained as a fire and explosives investigator before entering the Jesuits and worked at Tufts Medical Center’s emergency department as part of his Jesuit formation. After ordination, he will serve at Immaculate Conception Jesuit Church in New Orleans.

Stanley Charles, S.J., 36, was born in Port-au-Prince, Haiti. He speaks Haitian Creole, French, Spanish, English and Italian. Charles serves as a collaborator at the Peter Faber Center of Spirituality in Port-au-Prince.

Patrick N. Couture, S.J., 34, grew up in Quincy, Washington. Before entering the Jesuits, he worked as an assistant to the brewmaster at a local brewery. After ordination, he will complete an advanced theology degree from the Jesuit School of Theology of Santa Clara University in Berkeley, California.

Brillaire Délices, S.J., 37, was born in Cap-Haïtien, Haiti. In 2012, he was missioned to study theology at Laval University in Quebec City, where he earned a bachelor’s in pastoral theology and a diploma in spiritual accompaniment. Following ordination, he will serve with Fe y Alegría in Haiti, an international organization devoted to transforming communities through education.

Jean Robert Déry, S.J., 34, grew up in Saint-Jean-du-Sud in the south of Haiti. In 2012, he was missioned to Regis College at the University of Toronto, where he learned a fourth language while earning a Master of Divinity degree and a master’s degree in theology. After ordination, he will work for Jesuit Migrant Service at Haiti’s southern border.

Francisco Javier Díaz Díaz, S.J., 42, is a native of San José, Costa Rica. He was a doctor before entering the Jesuits, and his Jesuit formation included work for Catholic Charities’ Spanish Catholic Center in Washington, D.C. After ordination, he will complete graduate studies at Boston College.

Matthew R. Holland, S.J., 34, is a native of Seattle. He studied at the Pontificia Universidad Javeriana in Bogotá, Colombia, and taught at Bellarmine Preparatory School in Tacoma, Washington, his alma mater. After ordination, Holland will work in parish ministry.

Roy M. Joseph, S.J., 40, is from Atlanta. After earning his medical degree, Joseph joined the Jesuits. The son of Indian immigrants, Joseph looks forward to serving as a bi-ritual priest in both the Latin and Syro-Malabar traditions. After ordination, he will serve at St. Ignatius Loyola Parish in Denver.

Juan Carlos Rivera Castro, S.J., 31, was born and raised in San Juan, Puerto Rico. He was an art student before entering the Jesuits and studied philosophy at Spain’s Universidad Pontificia de Salamanca as part of his Jesuit formation. After ordination, he will serve as associate pastor at St. Francis Xavier College Church on the campus of Saint Louis University.

Paul H. Robson, S.J., 37, is a native of Winnipeg in Manitoba, Canada. In addition to working in India and Nepal, he has worked with First Nations communities in Espanola and on the Wikwemikong Unceded Indian Reserve, both in northern Ontario. After ordination, he will continue work toward a master’s in theology from Saint Paul University in Ottawa.

Andrew A. Rodriguez, S.J., 40, was born in the Philippines. He taught in public schools for seven years before entering the Jesuits and traveled to China, Guatemala and El Salvador as part of his Jesuit formation. After ordination, Rodriguez will serve at the Jesuit Retreat Center of Los Altos in California.

Christopher J. Ryan, S.J., 33, is from Haddon Township, New Jersey. He served in Brazil and also accompanied migrants along the Central American migration corridor as part of his Jesuit formation. After ordination, he will serve at St. Raphael the Archangel Catholic Church in Raleigh, North Carolina.

Emmanuel R. Saint-Hilaire, S.J., 32, was born in Gros-Morne in Haiti. Fluent in four languages and the author of three books, Saint-Hilaire will work with Jesuit Migrant Service and in a Jesuit parish in Haiti after ordination.

Kevin C. Spinale, S.J., 37, is from Arlington, Massachusetts. He served with the Peace Corps for two years in Romania before joining the Jesuits. After ordination, Spinale will work at his alma mater, the College of the Holy Cross, while completing his master’s degree in English from Boston College.

Daniel T. Spotswood, S.J., 33, was born in Mobile, Alabama. At the Pontificia Universidad Javeriana in Colombia, he earned a master’s degree in theology while pursuing high-altitude mountain climbing. After ordination, he will study social anthropology at the University of Edinburgh in Scotland.

Vincent L. Strand, S.J., 33, grew up in Dousman, Wisconsin, and attended St. Bruno Parish, where his family has been members since the church was founded in 1852. His brothers Luke and Jacob are both priests of the Archdiocese of Milwaukee. After ordination, Strand will study for an advanced degree at the Boston College School of Theology and Ministry.

George D. Teodoro, S.J., 36, is from Renton, Washington. He entered the Jesuits after a career in real estate. For the past year, Teodoro has taught history and art history at Verbum Dei High School in Los Angeles, where he will return after ordination.

Marc P. Valadao, S.J., 36, grew up in Fort Bragg, California. He earned a Master of Divinity degree and a Bachelor of Sacred Theology at the Jesuit School of Theology of Santa Clara University while doing ministry at San Quentin State Prison. After ordination, he will study in Rome at the Pontifical Biblical Institute.

Andrés Vall-Serra, S.J., 38, was born in Colombia and settled with his family in Wichita, Kansas. He served for three years in the Navy before joining the Jesuits and will serve in Punta Gorda, Belize, after ordination.

Samuel M. Wilson, S.J., 44, was born in Orange County, California. He studied philosophy at Saint Louis University and taught at Jesuit College Preparatory School of Dallas. After ordination, he will serve in San Juan, Puerto Rico.

Founded in 1540 by Saint Ignatius Loyola, the Society of Jesus (Jesuits) is the largest order of priests and brothers in the Roman Catholic Church. Jesuit priests and brothers are involved in educational, pastoral and spiritual ministries around the world, practicing a faith that promotes justice. In Canada and the United States, there are 30 Jesuit colleges and 80 pre-secondary and secondary schools with a shared goal of developing competent, compassionate and committed leaders in the service of the Church and society. Jesuits minister in parishes and at retreat houses and serve as chaplains at prisons, hospitals, nursing homes and in the military. In Canada and the U.S., the Jesuits are represented by the Jesuit Conference of Canada and the United States, headquartered in Washington, D.C. For more information on the Society of Jesus, visit http://www.jesuits.org.