Riveting New Xulon Book Explores The Remarkable Survivability Of George Washington – One Of The Most Historical Figures In The U.S.

Raymond G. Lorber pens terrific book filled with factual and proven information showing readers why Washington truly believed that he was protected by a higher power 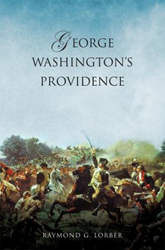 ... in-depth and educational journey into the life of the first president of the United States

Raymond G. Lorber’s new book, George Washington's Providence, ($17.99, paperback, 9781498446365; $8.99, e-book, 9781498446372) is an entertaining and enlightening look at the amazing survivability of one of our country’s most historical figures. Filled with factual and proven information, this illuminating book shows us all why George Washington truly thought he was protected by a higher power. As the first published confirmation of Washington’s belief in Providence, this amazing resource serves as an intriguing look into the complex mythology of one of our nation’s greatest leaders.

“I hope readers enjoy this in-depth and educational journey into the life of the first president of the United States,” states the author. “George Washington’s Providence serves as a valuable historical revelation for readers everywhere. Inspired by the numerous historical references to Washington’s belief in Providence, this brilliant book delves into history and uncovers the shocking fact that Washington, and his followers, were actually quite vocal about their beliefs.”

Lorber constructed a solid piece of historical research that provides firsthand accounts of George Washington’s many brushes with death. Lorber explores the belief that Washington’s remarkable resilience was due to some kind of divine intervention. By means of his concise expository style, Lorber manages to strike a balance that can be tricky to achieve in this type of study, sufficiently orienting readers but then stepping aside to allow the letters to speak for themselves. This approach is especially helpful for those unfamiliar with 18th-century epistolary-writing quirks with regard to punctuation, abbreviations, spelling, modes of address and the like. After one letter in which Washington chastises his wife’s brother-in-law for writing on a Sunday instead of going to worship, Lorber notes: “It exposes a very dedicated and committed believer. This view of George Washington was seldom revealed to the public.

After retiring, author Raymond G. Lorber dedicated ten years to the research and discovery that yielded the premise for this book. With an accomplished career in the technology industry, he founded and was CEO of a systems consulting firm. He has a B.S. from the University of Maryland and an M.B.A. from Golden Gate University. Lorber resides in Marin County, California.

Xulon Press, a division of Salem Media Group, is the world’s largest Christian self-publisher, with more than 15,000 titles published to date. Retailers may order George Washington's Providence through Ingram Book Company and/or Spring Arbor Book Distributors. The book is available online through xulonpress.com/bookstore, amazon.com, and barnesandnoble.com.