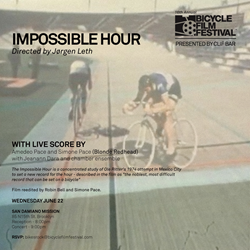 Adorama has announced that it will be sponsoring the 16th annual Bicycle Film Festival (BFF) in New York City.

Adorama, one of the world’s largest photography, video, audio, imaging and electronics retailers, has announced that it will be sponsoring the 16th annual Bicycle Film Festival (BFF), which will take place in New York City from June 22nd – 26th. The BFF, whose foundation is centered around cycling as a way of life, supports bicyclists through films, art and culture.

The BFF was created by Brendt Barbur, the founding festival director, after he was hit by a bus while riding his bike in New York City. Brendt wanted to create a positive experience from this negative event, and the first BFF was held in 2001 as a platform to celebrate the love for bicycling through music, art and film. Consequently, the BFF has been a driving force for the urban bike movement and the establishment of bicycling as a lifestyle in the city. It promotes a healthy life style while commuting in an ecologically friendly way.

Press Passes to the 2016 Bicycle Film Festival
Members of the media are invited to attend BFF film screenings and special events. For more information or to request a press pass, please contact Anya Nelson at anya(at)zazilmediagroup.com or Mary Becker at mary(at)beckerprny.com.

Adorama is listed as one of the top five electronics retailers by Consumer Reports, “Best of the Web” by Forbes.com, Internet Retailers Top 100, and is the official Electronics Retailer of the NY Giants.