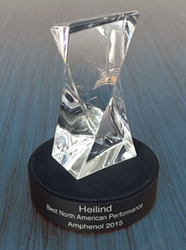 The award is given to the distributor who demonstrates the highest point-of-sale growth in a region throughout the calendar year. It was presented to Heilind during Amphenol’s annual EDS dinner reception in Las Vegas earlier this month.

"We at Amphenol are delighted that Heilind, with its unique focus on interconnect technologies, has achieved the strongest performance in the North American market in 2015,” said Adam R. Norwitt, President and CEO of Amphenol. “Congratulations to the entire Heilind team!"

Heilind is an authorized distributor for over a dozen Amphenol divisions. The manufacturer is one of Heilind’s largest, offering products in many of its core lines.

Bob Clapp, CEO and founder of Heilind Electronics, attributes his company’s outstanding performance to several factors. “I am honored to accept this prestigious award on behalf of everyone at Heilind,” Clapp stated. “This is a result of the hard work invested by our team members across all levels – from the sales staff to our warehouse employees. As we grow with Amphenol, we strive to stay committed to our core values of quality, innovation, supply chain integrity, and stellar customer service.”

Founded in 1974, Heilind Electronics, Inc. (http://www.heilind.com http://www.heilindasia.com) is one of the world's leading distributors of connectors, relays, sensors, switches, thermal management and circuit protection products, terminal blocks, wire and cable, wiring accessories, and insulation and identification products. Heilind has locations throughout the U.S., Canada, Mexico, Brazil, Germany, Singapore, Hong Kong, and China. Follow Heilind on Facebook at facebook.com/Heilind and on Twitter at twitter.com/Heilind.