Mason’s Famous Lobster Rolls™ announces it is now offering franchises to entrepreneurs in major metro markets in eastern and Midwest states. Founder Dan Beck, a seasoned restaurateur and seafood expert, has brought lobster to the fast casual segment with a business model that requires only a small footprint and a modest investment, which is less than half the that of the typical fast casual offering. 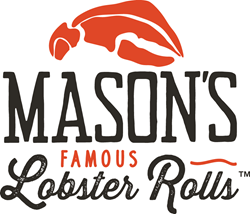 Mason’s Famous Lobster Rolls™ announces it is now offering franchises to entrepreneurs in major metro markets in eastern and Midwest states. Founder Dan Beck, a seasoned restaurateur and seafood expert, has brought lobster to the fast casual segment with a business model that requires only a small footprint and a modest investment, which is less than half the that of the typical fast casual offering. The lobster industry has grown exponentially in the past 20+ years due to increasingly popular demand, and the increasing presence of lobster roll shops suggests that lobster is no longer the exclusive province of full service restaurants or just for New Englanders.

Beck has engaged the services of FranPoint Partners, a well-regarded Maryland based franchise development firm which has supported and helped launched many successful Fast Casual restaurant concepts to help put the proper underpinnings in place and to ensure easy adaptation for franchisees, even those without restaurant experience. FranPoint’s senior partner, Richard J. Sharoff, also serves as the firm’s EVP of Franchising.

The prototype location in Annapolis, Maryland has grown quickly and received numerous accolades in the press and social media. Dan Beck is a life-long restaurateur has spent a number of years as a seafood buyer. His experience and connections allow Mason’s to efficiently source quality Maine lobster which is key to the success of the concept in order to ensure its premium quality and affordable price point to consumers. Beck points out his preferred vendors are certified sustainable and lobster is a healthy, low cholesterol food option, with fewer calories and saturated fat than both chicken and turkey.

Beyond the menu, Beck developed and refined his “Re-Maine TRUE” brand to create a striking visual impact. Mason’s is a modern twist on the traditional Maine lobster shack. There are natural wood finishes, large stenciled lobsters and a chalkboard menu, with a few floats and lobster pots strewn about. But the result is decidedly fresh and modern, not retro. According to Beck, that’s exactly what Mason’s is going for – a nod to traditional Maine values, but a clean, new offering for today’s consumer.

“The fast casual segment is a fantastic format for today’s consumer, but it is desperately needed a fresh concept beyond the typical burgers, pizza, Mexican and sub shop concepts which have dominated the category says Sharoff. “Mason’s Famous Lobster Rolls™ is a highly compelling franchise opportunity because it makes this ever popular, aspirational seafood item easily accessible to consumers and is affordable and easy to execute for franchisees.”

Mason’s franchise team believes they have a winning combination: a bold brand and a streamlined business model that takes a seafood delicacy and makes it affordable and easy to eat – all within 700-1200 square feet. Sharoff says the business systems are equally streamlined with all the requisite documented procedures in place. Easily executable marketing strategies are also developed for franchisees to grow and maintain their business.

It is fitting that Mason’s franchise announcement comes as they gear up to celebrate National Lobster Day June 15. If you’re in the Annapolis, Maryland area stop in for a free lobster hat and show off your hat on Facebook or Twitter to win a free lobster roll. If you’re interested in the potential of a longer-term lobster reward, direct franchise inquiries to Richard Sharoff, 410-216-9001.

About Mason’s Famous Lobster Rolls™
Mason’s Famous Lobster Rolls™ is a fast casual restaurant concept that makes the delicacy of lobster an affordable, easy lunch and dinner option for everyone. Launched in Annapolis, MD, Mason’s franchises are now available in major metro markets across the eastern United States. Mason’s is built on the integrity and simplicity of Maine values, from a simple, delicious menu to small footprint shops and a streamlined business model for franchise owners.