Charles Fenstermaker takes of the reins as CFO following the retirement of 18-year veteran Dan Lavergne. 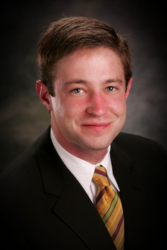 Charles Fenstermaker has been named Chief Financial Officer of C.H. Fenstermaker & Associates, LLC following the retirement of long-time CFO Dan Lavergne. Mr. Lavergne, who retired June 3, 2016, held the position of CFO for 18 years. He was instrumental in developing the company's current accounting structure and building the financial team to accommodate the rapid growth of the company.

Mr. Fenstermaker holds a Master's Degree in Business Administration from the University of Louisiana at Lafayette and is active in numerous community organizations. He currently serves on the Executive Committee of One Acadiana and is a board member for the Leadership Institute of Acadiana. Mr. Fenstermaker was previously a member of the board of directors for the Lafayette Charter Foundation in 2014 and 2015 and served on the Executive Leadership Team for the American Heart Association's Heart Walk event in 2013.