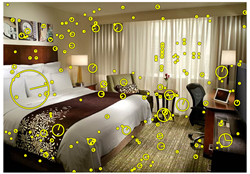 Travelers can help in the fight against sex trafficking by using a new, free mobile app called TraffickCam to anonymously photograph hotel rooms and upload data to a national database used by law enforcement and investigators to locate victims and their pimps.

TraffickCam was developed by the social action organization Exchange Initiative and researchers at Washington University in St. Louis. The app is available for iPhone and iPad at the App Store (bit.ly/TraffickCamApp) and for Android devices at Google Play (bit.ly/TraffickCamAndroid).

Sex trafficking is a form of modern day slavery that forces children and adults to engage in commercial sex acts against their will. Most victims are recruited when they are just 12 to 14 years old, coerced through drugs, violence, debt bondage and intimidation. According to UNICEF, at least 300,000 American children and 1.2 million children worldwide are trafficked each year.

TraffickCam allows any traveler with a smartphone to help fight sex trafficking by uploading photos of their hotel room to an enormous, constantly updated database of hotel room images. Federal, state and local law enforcement also securely submit photos of sex trafficking victims posed in hotel rooms to TraffickCam. Features such as patterns in the carpeting, furniture, room accessories and window views are matched against the database of traveler images to provide law enforcement with a list of potential hotels where the photo may have been taken. Early testing showed that the app is 85 percent accurate in identifying the correct hotel in the top 20 matches.

“The app created by the Exchange Initiative will give law enforcement yet another technological tool to reach that goal in a quicker, more proficient manner when investigating cases involving human trafficking and child exploitation,” Kavanaugh said.

The TraffickCam database currently contains 1.5 million photos from more than 145,000 hotels in every major metropolitan area of the U.S., taken by early users of the TraffickCam smartphone app and from publicly available sources of hotel room images. Nix Conference & Meeting Management staff members have actively used the app over the past year, uploading data during their professional and personal travels.

TraffickCam does not store any personally identifying information other than the phone’s GPS location. Any images that include people are rejected from the database.

Exchange Initiative is a social action organization founded by Nix Conference & Meeting Management, which leads the charge among meeting planners worldwide to help end sex trafficking in hotels. Nix presented the national conference “IGNITE: Sparking Action Against Sex Trafficking” in 2014, initiated and signed the first-ever Meeting Planners Code of Conduct with ECPAT-USA, and addresses the trafficking issue with the management of every hotel where they do business.

“The first time we were able to help law enforcement identify a hotel where a trafficked child had been photographed, we realized that our travel experience was valuable in the fight against trafficking,” said Molly Hackett, principal of Exchange Initiative and Nix.

“Our pivotal moment for developing the app came when we couldn’t identify a motel room. We connected the vice squad with our associates in that city, but it took three days to find the girl. That seemed way too long, given today’s technology.”

“Criminals take advantage of technology to advertise and coordinate illegal sex trafficking,” said Pless. “We’re using new technologies to fight trafficking, with this app that allows everyone to contribute data and with new image analysis tools to help law enforcement use the images in investigations.”

Exchange Initiative encourages everyone who travels – such as vacationers, business travelers, truck drivers, flight attendants and sports teams – to capture photos of hotel and motel rooms using the free TraffickCam app. Donations to support further development of the database can be made at http://www.exchangeinitiative.com. Donations will be doubled through a $100,000 matching grant challenge from the Congregation of the Sisters of Saint Joseph.