Bishop & Associates has named Heilind Electronics the #1 Electronics Distributor for 2016. This is the sixth time in a row Heilind has received this prestigious award. 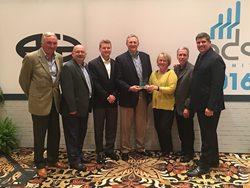 Heilind Electronics, a leading global distributor of electronic components, was recently recognized as the #1 electronics distributor. The award was announced at this year’s Electronic Distribution Show (EDS) in Las Vegas, and was based on results from an annual customer satisfaction survey conducted by Bishop & Associates -- the leading market research firm for the interconnect industry.

Over 800 participants completed the survey, which compared the performance of the top 10 electronics distributors in North America. The 2016 award is the sixth consecutive one for Heilind, who ranked #1 in nearly every category -- including on-time delivery, breadth of product offering, sales and technical support, and ease of doing business. The company ranked particularly well in terms of overall distributor preference, scoring over 30 percentage points over competing distributors.

“I am delighted to accept this award on behalf of everyone at Heilind,” said Bob Clapp, founder and CEO of Heilind Electronics. “The fact that we were rated first in almost every category shows the hard work and dedication exerted by team members in every department. We’ve always put customer satisfaction first; this has been the driver of our success thus far, and will continue to be in the future.”

Founded in 1974, Heilind Electronics, Inc. (http://www.heilind.com/http://www.heilindasia.com) is one of the world's leading distributors of connectors, relays, sensors, switches, thermal management and circuit protection products, terminal blocks, wire and cable, wiring accessories, and insulation and identification products. Heilind has locations throughout the U.S., Canada, Mexico, Brazil, Germany, Singapore, Hong Kong, and China. Follow Heilind on Facebook at facebook.com/Heilind and on Twitter at twitter.com/Heilind.