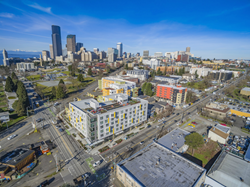 The Urban Land Institute (ULI) Terwilliger Center for Housing has announced the finalists for this year’s Jack Kemp Excellence in Affordable and Workforce Housing Award, which honors developments that ensure housing affordability for people with a range of incomes.

The award is provided to developments in which all or a portion of the units are affordable to households earning less than 120 percent of the area median income (AMI). The winner or winners will be announced during the ULI Fall Meeting in Dallas, October 24–27.

The 2016 Jack Kemp Excellence in Affordable and Workforce Housing Award finalists are:

“The six finalists for this year’s ULI Kemp Award show that mixed-income housing is achievable in a wide range of markets, with benefits for neighborhoods as well as residents,” said Stockton Williams, executive director of the ULI Terwilliger Center.

ULI established the Jack Kemp Excellence in Affordable and Workforce Housing Award in 2008, naming the award in memory of Jack Kemp, former secretary of the U.S. Department of Housing and Urban Development and ULI Terwilliger Center national advisory board member. The award is given annually to affordable and workforce housing developments that represent outstanding achievements in several areas, including affordability, innovative financing and building technologies, proximity to employment centers and transportation hubs, quality of design, involvement of public/private partnerships, and replicability of the development, among other criteria.

NOTE TO REPORTERS AND EDITORS: Courtesy images of the Jack Kemp Excellence in Affordable and Workforce Housing Award finalists are provided by ULI for use by members of the press upon request. For more details on the awards and previous winners, visit the Jack Kemp Awards webpage.